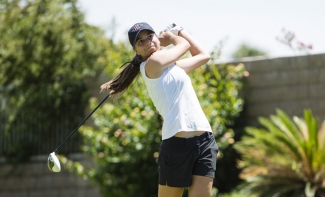 Photo:  Mila Chaves carded a 70 in round two of the Windy City Classic on Monday.  Courtesy goaztecs.com

The Aztecs posted a combined 303 over the first 18 holes before carding a 292 in the afternoon session on the par-71, 6,200 yard layout. Despite the 11-shot improvement, however, the Scarlet and Black remains nine strokes in back of 11th-place California (+18) and 12 shots behind 10th-place Purdue (+15) heading into Tuesday’s final round.

Mila Chaves (Asunción, Paraguay) compiled SDSU’s best 36-hole total, firing a 3-over 145 to finish the day in a tie for 22nd. The Aztec senior experienced a dearth of birdies en route to a first-round 75, before notching five drains in the afternoon, including three on her back nine.  Among her successes was an impressive conversion right after the turn on the par-5, 508-yard No. 1, which ranked as the fourth-toughest hole of the second round. Buoyed by her solid 70, Chaves managed to climb 16 places on the individual leaderboard.

In addition, Gioia Carpinelli (Boppelsen, Switzerland) sits two shots behind Chaves in a tied for 36th at 5-over 147 on rounds of 74-73. The Aztec freshman recorded five birdies overall, including a successful make on the par-4, 378-yard No. 12 in the afternoon, which ranked as the second most difficult green of the day. However, Carpinelli was saddled with three bogeys and a double in each round, which prevented a loftier perch.

Elsewhere, Fernanda Escauriza (Asunción, Paraguay) ended the day in a tie for 59th at 10-over 152 after logging rounds of 77-75. The Aztec sophomore found birdies elusive as well in the morning, but regrouped with four conversions in the second round, including three in a seven-hole stretch through the turn, which also featured four pars. However, consecutive bogeys on her final three greens thwarted her advance.

Haleigh Krause (Eugene, Ore.) wound up two strokes in back of Escauriza in a tie for 65th at 12-over 154 on rounds of 80-74. The SDSU senior got off to a rocky start in the morning with six bogeys on her first nine holes and was never able to recover despite notching a birdie on the par-3, 162-yard No. 2, which ranked as the third-toughest hole of the day. Krause’s second round was highlighted by an eagle at the par-5, 443-yard 18th following a birdie on the par-5 No. 16. The native Oregonian added six pars after the turn, but a double bogey at No. 1 along with a pair of bogeys at No. 8-9 sapped her momentum.

The SDSU contingent also included senior Georgia Lacey (Del Mar, Calif.), who completed the first 36 holes in a tie for 70th at 16-over 158 after shooting rounds of 81-77. The Torrey Pines High alumna was unable to generate any consistency, recording just one birdie in the first round on the par-4, 398-yard sixth.

Oklahoma State (-8) opened up an eight-stroke lead over Arizona State (E) in the team standings, while Michigan State (+2) remains in third, followed by Duke (+6) and Iowa State (+8).

ASU’s Linnea Strom (-6) owns a precarious one-shot advantage over OSU’s Kenzie Neisen (-5), while fellow Cowgirl teammate Maddie McCrary sits just one stroke behind in a tie for third at 4-under, along with the Michigan State duo of Paz Marfa and Sarah Burnham.

The Windy City Collegiate Classic concludes on Tuesday when the Aztecs tee off alongside Purdue and California for the final round, starting at 7:39 a.m. CT/5:39 a.m. PT on the 10th hole.