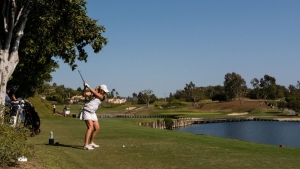 For the fifth consecutive year, SDSU will open its fall slate in Albuquerque, New Mexico, when it participates in the 41st annual Branch Law Firm/Dick McGuire Invitational Sept. 9-10 at UNM Championship Course. During last season’s excursion to the Land of Enchantment, the Aztecs were paced by Gioia Carpinelli, who tied for second on the individual leaderboard, propelling the Scarlet and Black to a third-place team finish.

Two weeks later, the Aztecs will find themselves in familiar environs once again, returning to the Mountain time zone for the Golfweek Conference Challenge Sept. 23-25 in Wolcott, Colorado. SDSU will be looking to claim their third tournament crown in five years at the scenic Red Sky Golf Club after a 10th-place hiccup last season.

A quick turnaround awaits the Aztecs the following week when they fly the friendly skies to the Pacific Northwest for the Molly Murphy Crowley Collegiate Sept. 30-Oct. 1 in Portland, Oregon. Pac-12 Conference members Oregon State and California will serve as co-hosts for the inaugural event to be contested at Waverley Country Club.

San Diego State will trek north once again for its fall finale when it competes in the Stanford Intercollegiate hosted by Dr. Condoleezza Rice Oct. 11-13 at Stanford Golf Course. Carpinelli and fellow teammate Sara Kjellker each tied for 20th individually during last season’s Bay Area venture, helping the Aztecs to a respectable eighth-place team finish in a stacked field of 17 squads.

After a fourth-month hiatus, SDSU opens its spring semester in earnest when its plays host to the Lamkin Invitational, scheduled for Feb. 10-11 at The Farms Golf Club in nearby Rancho Santa Fe, California. Launched in 2013, the Aztecs’ lone home tournament of the season will include a match-play format for the sixth straight year.

San Diego State will be afforded a two-week break in between its next two tournaments, starting Feb. 24-25 with the Bruin Wave Invitational, which will be held at San Luis Obispo Country Club for the fifth year in a row.

Following their sojourn along the Central Coast, the Aztecs will rack up some significant frequent flyer miles when they jet off to Hawaii for the Dr. Donnis Thompson Invitational March 10-11 at Kane’ohe Klipper Golf Course on the island of Oahu. SDSU last traveled to the Aloha State in the fall of 2009 when it competed in the Turtle Bay Resort Collegiate Invitational on the North Shore of Oahu in Kahuku.

The Aztecs will land stateside in desert surroundings for their next outing at the Mountainview Collegiate Invitational, set for March 20-22 at The Preserve Golf Club in Saddlebrooke, Arizona, outside of Tucson. SDSU will be making its initial appearance at the event, which is co-hosted by Missouri and Kansas State.

For the second year in a row, the Aztecs will head to wine country for their final tune-up before the conference tournament when they partake in the Silverado Showdown April 5-7 in Napa, California. SDSU placed 10th on the Silverado North Course last season in a strong field that featured nine top-40 schools

For the eighth consecutive season, the Mountain West Championship will be contested at Mission Hills Country Club April 20-22 in Rancho Mirage, California. Last season, SDSU outlasted Nevada by one stroke for its second league title in the last five years, as three individuals finished among the top 15, including a shared runner-up placement by Kjellker, while 2017 medalist Fernanda Escauriza landed in the fourth spot followed by Carpinelli, who tied for 15th.

The Aztecs will be seeking their 10th postseason berth as a team in the last 11 years when the NCAA conducts its regional championships, May 11-13, across four sites, including Pullman, Washington; South Bend, Indiana; Athens, Georgia and Raleigh, North Carolina.

If SDSU qualifies for the NCAA finals, it will compete in the national championship series for the first time in program history May 22-27 at Grayhawk Golf Club in Scottsdale, Arizona.

San Diego State, which finished the 2018-19 season with a No. 46 ranking by Golfstat, returns its top three starters from a year ago, including Carpinelli, who was a first-team all-MW honoree, while Kjellker and Escauriza received second-team all-conference recognition as well.