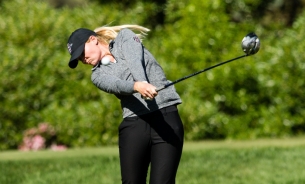 April 27, 2017 (San Diego) - The San Diego State women's golf team received word of its postseason destination on Thursday when the NCAA Division I Women's Golf Committee announced the Aztecs will compete in the NCAA Lubbock Regional, May 8-10, in Lubbock, Texas. SDSU garnered the No. 8 seed for its seventh regional berth in the last eight years and 14th overall since the regional format was introduced in 1993.

In addition to SDSU and UNLV, the MW’s third team invitation was extended to San José State, which will participate in the Columbus Regional on the Scarlet Course at Ohio State University in Columbus, Ohio. Meanwhile, the two remaining regional championships will be contested at the UNM South Championship Course in Albuquerque, N.M., and the UGA Golf Course in Athens, Ga, with New Mexico and Georgia serving as host schools, respectively.

The Aztecs will play 18 holes each of the three days, following a practice round on Sunday, May 7. The top six squads and three lowest individuals not on those teams from each regional will advance to the NCAA Championships, scheduled for May 19-24, at Rich Harvest Farms in Sugar Grove, Ill.

This year marks San Diego State's 10th trip to regional competition as a team and represents the 14th time the program has sent at least one golfer to the regional round since the format was established in 1993.

The Aztecs ended a six-year absence from the NCAAs in 2010, when the squad finished 13th at the Central Regional in Columbus, Ind. SDSU also posted a 17th-place showing at the 2011 West Regional in Auburn, Wash., followed by a tie for 20th at the 2012 East Regional in State College, Pa.

The Aztecs missed out on a team berth in 2013, but qualified three individuals, Paige Spiranac, Christine Wong, Emma Henrikson, to the Central Regional in Norman, Okla. In 2014, the Aztecs received an at-large bid as a team once again, tying for the 21st position in the West Regional at Suncadia Resort's Tumble Creek course in Cle Elum, Wash. In 2015, San Diego State posted its highest placement in regional action, landing in the 11th spot at the Entrada at Snow Canyon Resort in St. George, Utah, before finishing 12th a year ago at Stanford Golf Course.

The Aztecs, who are seeking for their first-ever national championship appearance as a team, are currently ranked 30th nationally by both Golfstat and Golfweek.