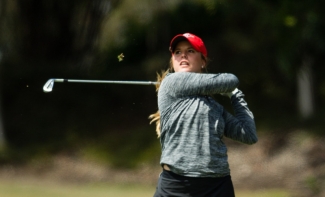 Photo:  Sara Kjellker (left) and Mila Chaves are tied for 10th after the first two rounds of the Bruzzy Challenge.  Courtesy goaztecs.com

The Aztecs trimmed 14 strokes off their combined score in the second round, carding a 295 after logging a 312 in the morning session. With its total, SDSU are just three shots behind TCU (+31) for fifth place and four strokes in back of Brigham Young (+30) heading into Tuesday’s final round on the par-72, 6,335-yard course layout.

SDSU’s Sara Kjellker (Hollviken, Sweden) and Mila Chaves (Asunción, Paraguay) are tied for 10th on the leaderboard after completing the first 36 holes at 6-over 150.

Despite two birdies in round one, Kjellker was unable to ease the sting of six bogeys before settling for a 76. The Aztec freshman regrouped in the afternoon somewhat, opening up with a pair of drains on her first two holes, including an impressive conversion on the par-4, 400-yard No. 9, which ranked as the fifth-most difficult hole of the day. She also recorded 12 pars en route to a 74, but two bogeys and a double on the par-4 18th prevented a loftier perch.

Chaves, meanwhile, stumbled to an opening-round 77, as six bogeys and a double on the par-4 16th sullied a three-birdie effort. Nevertheless, the SDSU senior responded with a 73 in the afternoon, logging a team-high 13 pars and back-to-back birdies on the seventh and eighth greens to offset two bogeys.

With their scores, the Aztec teammates find themselves eight strokes behind Texas A&M front-runners Maddie Szeryk (-2) and Arlana Saenz (-2), while Houston’s Megan Thothong (+3) and TCU’s Greta Bruner (+3) are tied for third.

In addition, Gioia Carpinelli (Boppelsen, Switzerland) remains two shots behind Kjellker and Chaves in a tie for 21st at 8-over-152 on rounds of 78-74. The SDSU freshman shaved four strokes off her first-round card thanks to three birdies, including a successful drain on the par-3, 120-yard No. 14, which ranked as the sixth-toughest hole of the day. However, four bogeys on her final 10 holes thwarted her ascent in the standings.

In her first collegiate start, Cameron Lee (Tustin, Calif.) is tied for 54th at 15-over 159 through 36 holes after notching rounds of 82-77. Despite sinking just one birdie in each session, the Aztec freshman climbed 12 places in the afternoon, countering six bogeys with 11 pars.

Rounding out the SDSU lineup was sophomore Fernanda Escauriza (Asunción, Paraguay), who struggled in her first varsity start since Feb. 13, shooting a 20-over 164 (83-81) to finish the day in a tie for 70th.

The Bruzzy Challenge concludes on Tuesday with the Aztecs teeing off alongside Texas Tech (8th, +39) and Boston College (9th, +42) for final-round action, beginning in a shotgun start at 6:30 a.m.