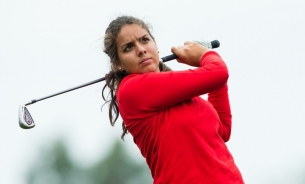 Photo:  Fernanda Escauriza (left) and Haleigh Krause are tied for 4th on the individual leaderboard after each shot a 71 in round one of the MW Championship.  Courtesy goaztecs.com

April 17, 2017 (Rancho Mirage, Calif.) - The San Diego State women’s golf team grabbed a share of the lead at the 2017 Mountain West Championship on Monday after shooting a collective 1-under-par 287 during the opening round  at Mission Hills Country Club.

With their total, the Aztecs find themselves tied atop the team standings with UNLV and New Mexico heading into Tuesday’s second round on the par-72, 6,270-yard Dinah Shore Tournament Course, while Fresno State (+4) sits in fourth place, followed by San José State (+9).

Four of SDSU’s five starters remain within five shots of the individual leader, including freshman Fernanda Escauriza (Asunción, Paraguay) and junior Haleigh Krause (Eugene, Ore.), who find themselves tied for fourth place with Boise State’s Dana Clary after all three golfers fired a 1-under 71.

Competing in her first MW Championship, Escauriza led the Aztecs with 15 pars on the day, including 11 straight through the turn, to go with a pair of birdies, while Krause offset two bogeys with three birdies of her own to complete the lowest round in her second conference tournament start.

With their performances, Escauriza and Krause sit just three shots behind front-runner Manon Molle of New Mexico, who carded an opening-round 4-under 68, while UNLV’s Harley Dubsky (-3) occupies the second spot, followed by San José State’s My Leander (-2, 70).

In addition, SDSU received a solid effort from senior Natalie Vivaldi (Oceanside, Calif.), who finished the day in a tie for seventh on the strength of an opening-round 72. The Rancho Buena Vista High alum countered two bogeys with a pair of birdies while recording 14 pars.

Meanwhile, Sirene Blair (South Jordan, Utah) one stroke behind Vivaldi in a tie for 11th after notching a 73 on Monday. Despite three birdies, the Aztec senior was denied a loftier perch after experiencing a rash of four bogeys, including three straight on holes 4-6.

The Aztec delegation also included Georgia Lacey (Del Mar, Calif.) who completed the first 18 holes in a tie for 17th after shooting a 74 on Monday. The SDSU junior led the squad with four birdies, including three on her first four holes. However, the Torrey Pines High product lost momentum after the turn, suffering three bogeys and a triple on the par-5, 485-yard No. 18 to drop out of the top five.

The Mountain West Championship continues with second-round action on Tuesday when San Diego State tees off with New Mexico and UNLV, beginning at 8:30 a.m. PT on hole No. 1. A live scoring link courtesy of Golfstat will be available on GoAztecs.com throughout the tournament.