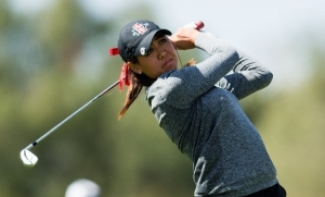 Photo:  Sirene Blair led the Aztecs with a 72 in round one of the NCAA Lubbock Regional.  Courtesy goaztecs.com

May 8, 2017 (Lubbock, Tex.) - The San Diego State women’s golf team sits in sixth place at the 2017 NCAA Lubbock Regional after firing a collective 10-over-par 298 on Monday during the opening round at The Rawls Course on the campus of Texas Tech University.

With their total, the Aztecs find themselves among the top third of a congested leaderboard, where just eight strokes separate the top 10 teams in the field of 18 schools. Arizona State (+5) currently owns a slim one-shot advantage over Oregon (+6), while Texas Tech (+8) and UCLA (+8) share the third position, followed by fifth-place Brigham Young (+9) heading into Tuesday’s second round on the par-72, 6,593-yard layout.

The top six teams and three low individuals not on the those squads advance out of regional competition into the NCAA championship series, set for May 19-24, in Sugar Grove, Ill.

Individually, all five of SDSU starters remain within five shots of one another, including senior Sirene Blair (South Jordan, Utah), who established a personal best for 18 holes in a regional tournament after carding an even-par 72. The four-time all-Mountain West performer countered four bogeys with four birdies, including a successful conversion on the par-4, 383-yard No. 12, before closing with six straight pars.

With her effort, Blair finished the day in a five-way tie for seventh, along with Texas Tech’s Sofia Garcia, Oklahoma’s Julienne Soo, Furman’s Haylee Horford and Caroline Nistrup, an individual competitor from LSU.

UCLA’s Lilia Vu shot a 4-under 68 to grab a one-stroke lead over Oregon’s Cathleen Santoso (-3), while Kent State’s Pimnipa Panthong (-2) sits in third, followed by Arizona State’s Monica Vaughn, BYU’s Alex White and Texas’ Sophia Schubert, who each posted a 71.

In addition, SDSU senior Natalie Vivaldi (Oceanside, Calif.) remains two strokes behind teammate Blair in a tie for 16th on the heels of an opening-round 74. The Rancho Buena Vista High product was 1-under for the day after sinking a birdie at No. 12. However, three bogeys on her final six holes prevented a loftier perch.

Elsewhere, juniors Georgia Lacey (Del Mar, Calif.) and Mila Chaves (Asunción, Paraguay) landed in a tie for 36th after each carded a 76 on Monday.

Lacey tied Blair for team-high honors with four birdies of her own, including drains on her first two greens. However, the Torrey Pines High alum was unable to ease the sting of three bogeys and a pair of double-bogeys at No. 3 and No. 14, which ranked among four toughest holes of the opening round.

Meanwhile, Chaves got off to a rocky start in her first appearance since mid-February, carding three bogeys and a double on her first eight holes. Unfazed, the native Paraguayan scraped off the rust with a birdie and eight pars over her final 10 holes.

Rounding out the Aztec lineup was Chaves’ compatriot Fernanda Escauriza (Asunción, Paraguay), who shot a 77 to finish the day in a tie for 55th. Despite a dearth of birdies on her scorecard, the SDSU freshman led the team with 14 pars to help offset three bogeys on the front. However, an untimely double-bogey on the par-5 18th hastened her drop on the leaderboard.

The Lubbock Regional continues on Tuesday when San Diego State tees off with UCLA and BYU, starting at 9 a.m. CT/7 a.m. PT on hole No. 1. A live scoring link courtesy of Golfstat will be available on GoAztecs.com throughout the tournament.