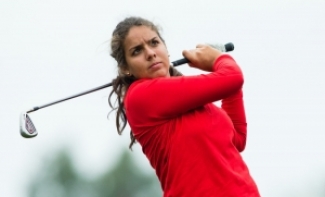 Photo:  Fernanda Escauriza led the Aztecs with a 72 during the second round of the NCAA Lubbock Regional.  Courtesy goaztecs.com

May 9, 2017 (Lubbock, Tex.) - Despite shaving two strokes off its combined score from round one, the San Diego State women’s golf team slipped two notches into eighth place at the 2017 NCAA Lubbock Regional on Tuesday after posting an 8-over-par 296 during the second round at The Rawls Course on the campus of Texas Tech University.

With their effort, the Aztecs, who find themselves at 18-over 594 for the week, remain two shots behind Kent State (+16) and UCLA (+16) for the sixth position as the top six teams and three low individuals not on those squads advance out of regional competition into the NCAA championship series, scheduled for May 19-24, in Sugar Grove, Ill.

On the strength of a tournament-best 277, Arizona State (-6) maintains a comfortable 12-stroke advantage over host Texas Tech (+6), while Furman (+7) vaulted six places into a tie for third with Oregon (+7), followed by fifth-place Texas (+13).

Collectively, SDSU drained seven birdies on the front nine, climbing as high as fourth in the standings, but lost ground after the turn as three untimely double-bogeys derailed the Aztecs’ momentum.

Fernanda Escauriza (Asunción, Paraguay) posted the Scarlet and Black’s low round of the day with an even-par 72. The reigning Mountain West Freshman of the Year led the squad with four birdies, including back-to-back drains on her final two holes after carding a bogey on the par-3 16th.  With her performance, Escauriza catapulted 27 places into a tie for 28th at 5-over 149.

Likewise, junior Georgia Lacey (Del Mar, Calif.) displayed upward mobility on Tuesday, jumping eight places into 28th along with Escauriza after logging a 73. The first-team all-conference performer was cruising on the front nine, sinking three birdies against one bogey, before reeling off four straight pars to begin the back. In addition, the Torrey Pines High product recorded another birdie on the par-4, 416-yard No. 15, which ranked as the toughest hole of the second round. However, a double-bogey on the par-4 14th, followed by consecutive bogeys at No. 16 and 17, cast a pall on her day.

Conversely, Sirene Blair (South Jordan, Utah) tumbled 12 places on the leaderboard into a tie for 19th at 3-over 147 after shooting a second-round 75. The SDSU senior logged a team-high 14 pars on the day, but managed just one birdie, as two bogeys and a double-bogey on the par-4 13th precipitated her drop.

Despite carding her second straight 76, Mila Chaves (Asunción, Paraguay) lost ground as well on Tuesday, slipping 10 spots into a tie for 46th at 8-over 152. The Aztec junior also found birdies elusive, recording just one conversion on the par-4, 410-yard No. 5. Still, Chaves eased the sting of three bogeys somewhat with 13 pars, before suffering an ill-timed double-bogey on the par-5, 528-yard 18th.

The SDSU delegation also included senior Natalie Vivaldi (Oceanside, Calif.), who dropped into a tie for 49th at 9-over 153 on the heels of a second-round 79.  The Ranch Buena Vista High product was unable to generate any consistency, as seven bogeys proved too much to overcome.

The Lubbock Regional concludes on Wednesday when San Diego State tees off once again with UCLA and Brigham Young, beginning at 8 a.m. CT/6 a.m. PT on hole No. 1. A live scoring link courtesy of Golfstat will be available on GoAztecs.com.