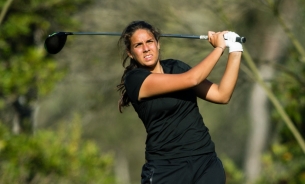 Aztecs’ Fernanda Escauriza tied for second individually after second round

Photo:  Fernanda Escauriza moved into a tie for second at the MW Championship after tying for the low round of the day with a 3-under 69.  Courtesy goaztecs.com

April 18, 2017 (Rancho Mirage, Calif.) - The San Diego State women’s golf team slipped one notch into second place at the 2017 Mountain West Championship on Tuesday after posting a combined 3-over-par 291 during the second round  at Mission Hills Country Club.

With their card, the Aztecs remain just one shot behind UNLV (+1) heading into Wednesday’s final round on the par-72, 6,270-yard Dinah Shore Tournament Course. In addition, San José State (+11) jumped two places into the third position, while Fresno State (+15) and New Mexico (+15) are tied for fourth with 18 holes left to play.

Fernanda Escauriza (Asunción, Paraguay) was the lone SDSU player to shoot in red figures during round two, firing a career-best 69 to move into a tie for second at 4-under 140, along with My Leander of San José State. Despite two bogeys on the back nine, the Aztec freshman still tied for the low round of the day, climbing two places on the individual leaderboard thanks to a team-high five birdies, including impressive conversions on par-3 holes No. 3 and No. 5, which ranked as the third and fourth-most difficult greens on Tuesday.

With her total, Escauriza sits three strokes in back of front-runner Manon Molle of New Mexico (-7), who also shot a second-round 69, while a trio of UNLV golfers, Harley Dubsky (-2), Alexandra Kaui (-1), Elizabeth Prior (-1), comprise the remainder of the top five.

In addition, Sirene Blair (South Jordan, Utah) displayed upward mobility, leaping four places into a tie for seventh at 1-over-145 on the heels of a second-round 72. The Aztec senior carded three birdies on the front nine, including a successful drain on the par-3, 155-yard No. 8, which ranked as the sixth-toughest hole of the tournament thus far. However, Blair sank just one birdie after the turn against two bogeys and a double-bogey on the par-4 16th, which prevented a steeper ascent.

The rest of the SDSU contingent lost ground on Tuesday, including Natalie Vivaldi (Oceanside, Calif.), who tumbled three places into a tie for 10th at 2-over 146, one shot behind Blair, on the heels of a 74. The Aztec senior was even for the day after making birdie on the par-5 No. 9, but was unable to circle her scorecard on the back nine, finishing with seven pars and two bogeys on the par-4 13th and the par-5 18th.

Elsewhere, Haleigh Krause (Eugene, Ore.) experienced a sharper drop, sliding eight spots into a tie for 12th at 3-over 146 after posting a 76. The SDSU junior collected 10 pars and two birdies, including a successful make at No. 18, but six bogeys proved too much to overcome.

Fellow classmate Georgia Lacey (Del Mar, Calif.) matched Krause with a 76 on Tuesday, slipping one place into a tie for 18th at 6-over 150. The Torrey Pines High product got off to a shaky start with four bogeys on her first eight holes before sinking birdies at No. 9 and No. 13. However, two additional bogeys on the back nine stalled her recovery effort.

Just eight golfers in the field managed to break par on Tuesday, with the average score ballooning to 76.31, compared to the first-round average of 75.44.

The Mountain West Championship concludes on Wednesday when San Diego State tees off with UNLV and San José State for the final round, starting at 8:30 a.m. PT on hole No. 1. A live scoring link courtesy of Golfstat will be available on GoAztecs.com.