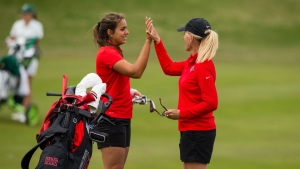 March 27, 2019 (Rancho Santa Fe) - The San Diego State women's golf team wrapped up its lone home tournament of the year in style with a 4-1 triumph over Sacramento State on Wednesday in the third-place match of the Lamkin Invitational at The Farms Golf Club.

Gioia Carpinelli (Boppelsen, Switzerland) was the first Aztec off the course after posting a decisive 7&5 victory over Nishtha Madan. Starting on the No. 6 tee, the SDSU sophomore never trailed in the duel, building a six-hole advantage by the 14th green, thanks to a steady diet of seven pars and two birdies, while her Hornet adversary was hampered by a series of misfires during that stretch, including three bogeys.

Shortly thereafter, Fernanda Escauriza (Asunción, Paraguay) emerged with a 4&2 decision over Sydney Smith. After the players halved their first two holes, the Aztec junior vaulted in front for good with two pars on the sixth and seventh greens, while her opponent suffered two untimely bogeys. Escauriza soon added to her lead with a birdie at No. 11 and was never threatened the rest of the way. With her effort, the reigning South American Amateur champion completed the event with a 3-0 record in match play.

Like the two previous Aztec victors, Kjellker never trailed in her encounter with Babic, forging a three-hole advantage by her seventh hole of the round at No. 11 with the help of four birdies. The SDSU sophomore ceded a hole at No. 12, but gradually extended the margin to five with four consecutive pars, while her opponent was stymied by three bogeys during that span.

Starting on the first tee, Ranches faced a pair of early one-hole deficits but methodically took control after Viden posted three bogeys over a four-hole stretch from No. 10-13. After the two players halved the 14th, the Aztec freshman gave back a hole with a bogey at No. 15. However, her Sac State foe returned the favor on the very next green, as Ranches maintained the upper hand the rest of the match.

Rounding out the SDSU delegation was Kitty Tam (Hong Kong, China), who fell to Julia Becker by a score of 3&2. The Aztec senior played in pursuit mode for most of the day after making bogey on her second hole at No. 5, while her counterpart notched a par. Tam soon faced a wider deficit and could draw no closer after Becker made birdies on the next two greens, which trumped a pair of pars.

San Diego State will have one final tune-up before the Mountain West Championship when it heads north to wine country for the Silverado Showdown, April 7-9, at Silverado Resort in Napa, Calif.