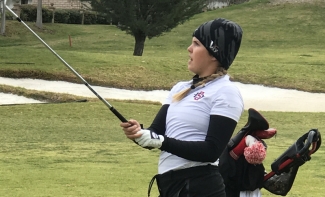 Aztec freshman Sara Kjellker (below) in fifth individually after 36 holes

With their total, the Aztecs remain seven strokes behind second-place UCLA (+27) and 12 shots in back of front-runner USC (+22) heading into Tuesday’s final round on the par-72, 6,323-yard course layout.

Individually, Sara Kjellker (Hollviken, Sweden) finished the day in fifth place with a combined 5-over 149 after carding rounds of 76-73. The SDSU freshman sank five birdies on the day, including three in the second round to climb eight spots on the leaderboard.

With her score, Kjellker sits nine strokes behind UCLA’s Lilia Vu (-4), who completed rounds of 69-71 to grab a five-shot advantage over Stanford’s Albane Valenzuela (+1), while USC’s Jennifer Chang (+3) and UCLA’s Mariel Galdiano (+3) landed in the third position after 36 holes.

Along with Kjellker, Gioia Carpinelli (Boppelsen, Switzerland) was the only other Aztec golfer to gain ground between the first and second rounds Tuesday when light rain began to fall on the Central Coast.

Despite notching three birdies in the morning, including back-to-back drains on the eighth and ninth greens, Carpinelli was saddled with an opening-round 77 thanks to a rash of eight bogeys, including three on her final four holes. The SDSU freshman managed just one birdie in the afternoon, but cut her bogey total in half, finishing with 13 pars to vault 11 places on the strength of a second-round 75.

On the flip side, however, Mila Chaves (Asunción, Paraguay) slipped 11 places into a tie for 24th after posting rounds of 76-80. The Aztec senior registered three birdies on the day, but made just one drain in round two at the par-5, 490-yard No. 11, as seven bogeys and a double-bogey hastened her drop.

Rounding out the SDSU contingent were fellow classmates Georgia Lacey (Del Mar, Calif.) and Haleigh Krause (Eugene, Ore.), who both fired a 13-over 157 to finish the day in a tie for 30th.

Lacey found herself near the top of the leaderboard in a five-way tie for third place after shooting an opening-round 73, highlighted by a trio of birdies. The Torrey Pines High alumna also made a birdie in the afternoon on the par-5, 558-yard No. 1, which ranked as the fifth-most difficult hole on Monday. However, Lacey’s score ballooned to an 84 on the heels of nine bogeys and two doubles, precipitating her steep descent.

Krause, meanwhile, was forced to settle for rounds of 77 and 80, which featured just one birdie on her finishing hole in the afternoon at the par-5, 493 No. 5.

The Bruin Wave Invitational wraps up on Tuesday when the Aztecs tee off alongside USC and UCLA for the final round, starting at 9:25 a.m. on hole No. 1.