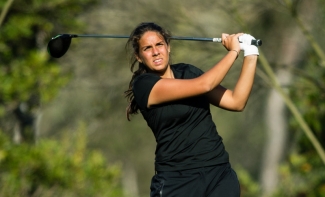 February 11, 2018 (Palos Verdes Estates, Calif.) - The San Diego State women’s golf team is tied for 14th place at the Northrop Grumman Regional Challenge after shooting a 19-over-par 303 on Sunday during the opening round at Palos Verdes Golf Club.

In a stacked field that features 13 of the nation’s top-30 teams, the Aztecs, along with Tennessee, find themselves 10 shots in back of Northwestern (+9) for fifth place heading into Monday’s second round on the par-71, 6,017-yard course layout.

All five SDSU starters are within four shots of one another on the individual leaderboard, including Sara Kjellker (Hollviken, Sweden), who sits in a tie for 32nd after carding an opening-round 74. The Aztec freshman recorded 10 pars and two birdies, including a successful make on the par-3, 147-yard No. 8, which ranked as the fifth-most difficult hole on Sunday. However, five bogeys, including one on the par-4 18th, prevented a loftier perch.

Gioia Carpinelli (Boppelsen, Switzerland) remains one stroke behind her SDSU teammate in a tie for 39th after firing a 75 on Sunday. The Aztec freshman logged 11 pars of her own to go with a pair of birdies, including an impressive conversion on the par-4, 360-yard No. 1, which ranked as the fourth-toughest green of the opening round. After notching back-to-back bogeys, the Swiss native got back to even with another birdie at No. 5, but a double-bogey at No. 8, coupled with two additional bogeys on the back nine hindered her advance.

Elsewhere, Mila Chaves (Asunción, Paraguay) finds herself in a tie for 53rd on the heels of a 76. The SDSU senior got off to a rocky start with four bogeys and a double on her first six holes, but rebounded nicely with five pars and three birdies, including consecutive makes on the seventh and eighth greens. Like her aforementioned teammates, however, Chaves had her momentum derailed down the stretch with bogeys at No. 15 and No. 18.

Rounding out the Aztec lineup were senior Georgia Lacey (Del Mar, Calif.) and sophomore Fernanda Escauriza (Asunción, Paraguay), who ended the day in a tie for 64th after each shot a 78. Lacey stumbled out of the gates with three consecutive bogeys followed by a double at the par-3 No. 4, before draining birdies on the eighth and 16th greens.

Despite a dearth of birdies on her scorecard, Escauriza still managed a strong finish with four straight pars to complete her round.

In the team standings, intrastate rivals Arizona and Arizona State share the lead after 18 holes after each carded a collective 1-over 285, while Alabama and UCLA remain tied for third at 8-over 292.

The Northrop Grumman Regional Challenge resumes on Monday when the Aztecs tee off alongside Baylor and UNLV for the second round, starting at 10:17 a.m. PT on hole No. 10.