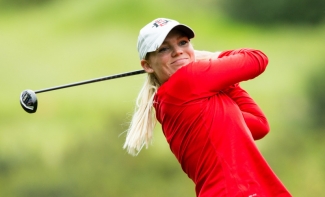 Photo:  Georgia Lacey carded the Aztecs' low score of the day with a 70 in round two.  Courtesy goaztecs.com

Through 36 holes, the Aztecs share the fifth spot after posting scores of 294-287 to remain six strokes behind front-runner Oklahoma State (-1), while Arizona (E) occupies in second position, followed closely by Colorado (+2) and Northwestern (+2).

Individually, Gioia Carpinelli (Boppelsen, Switzerland) leads the Scarlet and Black after carding a collective 1-over 145 to finish the day in a tie for 23rd. In her very first collegiate tournament, the SDSU freshman completed a wild opening-round 73, offsetting four bogeys and a double bogey with a trio of birdies and an eagle on the par-4, 336-yard 15th, where she utilized a gap wedge from 92 yards away to find the bottom of the cup. The Swiss native delivered a more consistent effort in the afternoon, however, balancing two bogeys with a pair of birdies en route to a 72.

Elsewhere, fellow teammates Haleigh Krause (Eugene, Ore.) and Sara Kjellker (Hollviken, Sweden) sit just one shot in back of Carpinelli in a tie for 28th at 2-over 146.

Krause recorded a 71 in the morning, featuring four birdies, including an impressive drain on the par-4 10th, which ranked as the toughest hole of the opening round. However, the Aztec senior was saddled with a 75 in the afternoon, as five bogeys prevented a loftier perch.

Kjellker also notched four birdies in her collegiate debut, including back-to-back drains on the 17th and 18th greens to highlight an opening-round 72. The SDSU freshman made two additional birdies in the afternoon, including a successful conversion on the par-4 No. 8, which ranked as the fifth-most difficult green of round two. However, Kjellker was unable to overcome the sting four bogeys, ultimately settling for a 74.

Elsewhere, Georgia Lacey (Del Mar, Calif.) finds herself in a tie for 46th after shooting a 4-over 148. The Aztec senior regrouped from a sluggish 78 in round one to post the team’s lowest number of the day with a 70 in the afternoon. Lacey registered just one blemish on her scorecard, a bogey at No. 6, while amassing 14 pars to go with three birdies, including a make at No. 10.

Mila Chaves (Asuncion, Paraguay) also shaved eight strokes off her opening-round score, notching a 71 in the second session, countering a bogey at No. 7 with a team-high 15 pars as well as birdies on the first and 15th greens. With her total, the SDSU senior sits in a tie for 61st with a combined 6-over 150.

The Aztec delegation also included Daniela Anastasi (La Jolla, Calif.), an individual competitor who sits in a tie for 79th at 9-over 153 after shooting rounds of 78-75.

Bianca Pagdanganan of Arizona (-10) carded back-to-back 67s to grab a six-shot lead over UNLV’s Yang Liu (-4) on the individual leaderboard, while Stanford’s Andrea Lee, New Mexico’s Darian Zachek, Oklahoma State’s Kenzie Niesen and Colorado’s Robyn Choi are all tied for third at 3-under.

The Branch/McGuire Invitational concludes on Tuesday when SDSU tees off alongside Stanford and Northwestern in a shotgun start at 7:30 a.m. MT/6:30 a.m. PT. A live scoring link courtesy of BirdieFire is available for the entire tournament on GoAztecs.com.