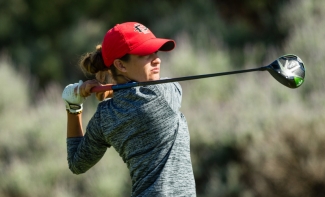 Photo:  Haleigh Krause (left) and Mila Chaves each carded a 71 on Monday to lead the Aztecs during the first round of the San Francisco Regional.  Courtesy goaztecs.com

May 7, 2018 (San Francisco) - The San Diego State women’s golf team finds itself in a tie for seventh place at the NCAA San Francisco Regional after shooting a collective 1-over-par 289 during the opening round on Monday at the TPC Harding Park Golf Course.

With their total, the Aztecs share the seventh position with North Carolina heading into Tuesday’s second round on the par-72, 6,369-yard course layout. More importantly, SDSU remains one stroke behind a fourth-place  logjam of Louisville, Stanford and Oregon, as the top six teams and three low individuals not on the those squads advance out of regional competition into the NCAA championship series, scheduled for May 18-23, in Stillwater, Okla.

Not to be outdone, the Aztecs also established a program record for lowest 18-hole team score in a regional event, eclipsing the previous standard of 291 set in the final round at St. George, Utah in 2015.

In all, a total of 11 strokes separate the top 10 schools in the 18-team field, as UCLA posted a combined 8-under 280 to grab a four-shot lead over Kent State and Colorado, which are tied for second at 4-under 284, while the aforementioned Louisville, Stanford and Oregon squads occupy the fourth spot at 1-under 287. Rounding out the top 10 behind SDSU and UNC are Ole Miss (+2) and Oklahoma State (+3).

Individually, SDSU was paced by the senior tandem of Mila Chaves (Asunción, Paraguay) and Haleigh Krause (Eugene, Ore.), who finished the day in a tie for 10th after each carded a 1-under 71. Starting on the 10th tee, both players posted remarkably similar scorecards, offsetting three bogeys with four birdies apiece.

Among Chaves’ conversions were back-to-back drains on the 11th and 12th greens, followed by an impressive make on the par-4, 400-yard No. 18, which ranked as the second-toughest hole of the day.

Krause, meanwhile, maintained her composure with spot-free golf after the turn, highlighted by a trio of birdies, including a successful conversion on the par-3, 180-yard No. 8, which ranked as the fifth-most difficult hole of the opening round.

With their scores, Chaves and Krause remain five strokes off the pace with 13 other golfers on a congested leaderboard, where Stanford’s Andrea Lee, Colorado’s Brittany Fan and UCLA’s Mariel Galdiano share the top spot after each fired a 6-under 66 on Monday.

In addition, Georgia Lacey (Del Mar, Calif.) sits one shot in back of Chaves and Krause in a tie for 25th on the heels of an opening-round 72. The Aztec senior led the squad with 16 pars, countering a bogey on the 18th green with a birdie on the par-5, 505-yard No. 4.

Elsewhere, Sara Kjellker (Hollviken, Sweden) ended the day in a tie for 52nd after logging a 75 in her initial regional appearance. The SDSU freshman recorded 13 pars of her own, including nine straight through the turn, but lost ground after notching consecutive bogeys on the sixth, seventh and eighth greens. However, Kjellker rebounded in a big way with a birdie on her finishing hole, the par-5, 490-yard No. 9.

Fellow classmate Gioia Carpinelli (Boppelsen, Switzerland) made her postseason debut as well, tying for 76th after the first 18 holes thanks to a 78. Following an untimely double-bogey on the par-3 17th, the Aztec rookie made birdie at No. 18, followed by six consecutive pars. However, Carpinelli was unable to sustain the momentum, closing with two bogeys and a double on her final three holes.

The NCAA San Francisco Regional resumes on Tuesday when San Diego State tees off alongside North Carolina and Ole Miss beginning at 8 a.m. on hole No. 1.