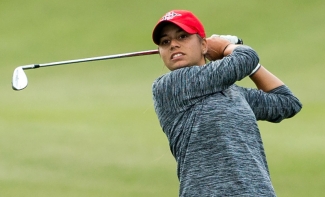 Photo:  Mila Chaves carded a 72 in the opening round of the 2018 MW Championship to finish the day in a tie for fifth.  Courtesy goaztecs.com

April 16, 2018 (Rancho Mirage, Calif.) - The San Diego State women’s golf team remains in a tie for third place after the opening round of the 2018 Mountain West Championship after shooting a collective 10-over-par 298 on  Monday at Mission Hills Country Club.

With their total, the Aztecs share the third spot with New Mexico heading into Tuesday's second round on the par-72, 6,270-yard Dinah Shore Tournament Course, trailing front-runner UNLV (-1) by 11 shots and second-place Fresno State (+7) by three strokes.

Individually, Mila Chaves (Asunción, Paraguay) finds herself in a four-way tie for fifth place on the leaderboard, after carding an even-par 72. The SDSU senior balanced five bogeys with a team-high five birdies, including back-to-back impressive drains on the 11th and 12th greens, with the latter ranking as the third-most difficult hole of the day.

As a result, Chaves, the reigning South American Women’s Amateur Champion, lurks just two shots in back of first-round leader Mackenzie Raim of UNLV, while Ingrid Gutierrez of New Mexico, Mimi Ho of Fresno State and Alexandra Cooper of San José State occupy the second spot at 1-under 71.

In addition, senior Georgia Lacey (Del Mar, Calif.) and freshman Gioia Carpinelli (Boppelsen, Switzerland) remain two strokes behind Chaves in a tie for 11th after each fired a 74 on Monday.

Lacey managed to ease the sting of five bogeys somewhat with three birdies, including successful conversions at the par-4 sixth and the par-5 11th, which bookended a string of four straight pars.

Carpinelli, meanwhile, found birdies elusive, recording just one drain on the par-3, 155-yard eighth to go with a team-high 10 pars, which helped offset three bogeys, including two on the back nine.

Rounding out the Aztec delegation were sophomore Fernanda Escauriza (Asunción, Paraguay) and freshman Sara Kjellker (Hollviken, Sweden), who both logged a 78 to finish the day in a tie for 34th.

The SDSU teammates lost ground in the standings as the afternoon progressed. Escauriza was just 2-over after notching consecutive pars at No. 9 and No. 10; however, two bogeys on the 11th and 14th greens, coupled with a double on the par-5 18th, precipitated her drop.

Despite four birdies, including a successful make on No. 18, Kjellker was plagued by seven bogeys, along with a triple on the par-3 1th.

The Mountain West Championship continues on Tuesday when San Diego State tees off alongside San José State and Nevada, starting at 7:45 a.m. on hole No. 1. A live scoring link, courtesy of Golfstat, will be available on GoAztecs.com.