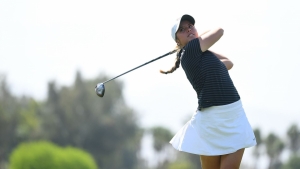 September 25, 2019 (Wolcott, Colo.) - The San Diego State women’s golf team slipped two notches into a tie for fifth place at the Golfweek Conference Challenge on Wednesday after shooting a combined 5-over-par 293 during the final round at Red Sky Golf Club.

The Aztecs entered the day in third but were unable to keep pace with the leaders, completing the 11th annual tournament with a three-round total of 6-over 870, along with TCU, on the par-72, 6,261-yard Tom Fazio Course.

Individually, Sara Kjellker (Hollviken, Sweden) was the lone SDSU golfer to finish in red figures for the week, climbing three places into a tie for fourth with a career-best 7-under 209, which ranks sixth in program history for lowest 54-hole score.

The Aztec junior tied for the tournament lead with 16 birdies, including seven over the final 18 holes. Among her conversions were back-to-back drains on the par-5 fifth and the par-4 sixth, along with a successful make on the par-4, 385-yard No. 14, which ranked as the third-toughest hole of the week. However, a pair of untimely double bogeys on the 10th and 11th greens essentially knocked her out of contention.

Still, Kjellker managed a strong recovery with spot-free golf over the final seven holes, notching birdies at Nos. 12, 14, 17 and 18 to finish four shots behind Denver’s Anna Zanusso, who claimed medalist honors after logging an 11-under 205. Meanwhile, Pepperdine’s Alexa Melton (-9) landed in the runner-up spot, one stroke of ahead of UCLA’s Emma Spitz (-8), followed by Kjellker, South Alabama’s Siti Shaari and TCU’s Sabrina Iqbal.

Three of SDSU’s remaining starters lost ground on Wednesday, including Bernice Olivarez Ilas (Ayala Alabang, Philippines), who dropped five places into a tie for 24th at 3-over 219 on the heels of a final-round 74. After recording four bogeys on her first 10 holes, the Aztec freshman regrouped with three consecutive birdies on holes 12-14, but it wasn’t enough to prevent a slide down the leaderboard.

Gioia Carpinelli (Boppelsen, Switzerland) experienced a similar fate, tumbling 11 places into a tie for 34th at 6-over 222 after carding a 76. The SDSU junior opened with five consecutive pars but was plagued by inconsistency the rest of the way, sinking just two birdies on the par-4 11th and the par-5 18th against six bogeys.

Fernanda Escauriza (Asunción, Paraguay) witnessed a more precipitous fall, plunging 16 places into a tie for 45th at 8-over 224 after shooting a 77.  The Aztec senior collected 11 pars to go with a pair of birdies on the 13th and 18th greens, but three bogeys and two double bogeys hastened her drop.

Conversely, April Ranches (San Diego, Calif.) was the only other SDSU player to display upward mobility on Wednesday, jumping five places into a tie for 53rd with a 10-over 226 thanks to a career-best 73. The Aztec sophomore eased the sting of six bogeys with five birdies, including a successful drain on her second-to-last hole at the par-5, 550-yard No. 2.

San Diego State will have a quick turnaround before its next tournament when it travels to the Pacific Northwest for the inaugural Molly Murphy Crowley Collegiate Invitational, Sept. 30-Oct. 1, at Waverley Country Club in Portland, Oregon.