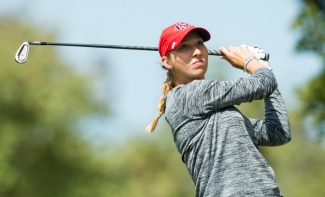 Photo:  Gioia Carpinelli was a winner in her match vs. Colorado on Tuesday.  Courtesy goaztecs.com

With the victory, the Aztecs advance to the fifth-place match against UCLA on Wednesday, beginning at 8:30 a.m.  The Bruins knocked off California by a 4-1 count in their first dual of consolation play.

Starting on hole No. 10, freshman Gioia Carpinelli (Boppelsen, Switzerland) registered a 4&3 triumph over the Buffaloes’ Brittany Fan, taking the lead for good after draining consecutive birdies on the 15th and 16th greens, while her adversary went par-par.

In addition, senior Georgia Lacey (Del Mar, Calif.) emerged victorious by an identical 4&3 margin over Elle Otten. The Torrey Pines High alumna sank four birdies in her match, including a successful conversion after the turn at No. 7, where she sealed the win.

Meanwhile, fellow classmate Mila Chaves (Asunción, Paraguay) tallied the Scarlet and Black’s winning point with a narrow 2&1 decision over Gillian Vance. The reigning South American Women’s Amateur champion was all square in her encounter before closing with a par-par-birdie-par, while her Colorado counterpart went bogey-par-birdie-bogey.

Rounding out the SDSU starting five were Sara Kjellker (Holliven, Sweden) and senior Haleigh Krause (Eugene, Ore.) Kjellker experienced a 3&1 setback to Kirsty Hodgkins, while Krause suffered an early exit against Robyn Choi in a 7&5 defeat.

The SDSU March Mayhem concludes on Wednesday, when USC faces Texas in the championship match, while Iowa State takes on Northwestern in the third-place bracket. In addition to the Aztecs’ battle with UCLA, Colorado will lock horns with Cal for seventh place, while the round robin bracket features Stanford vs. Baylor and Pepperdine against Brigham Young.