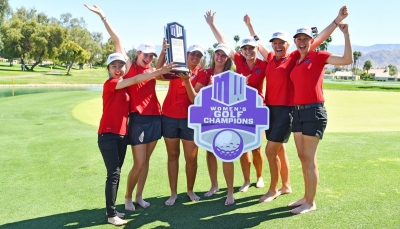 It wasn’t easy, however, as the Aztecs endured some high drama to hold off a hard-charging Wolf Pack squad on the par-72, 6,240-yard Dinah Shore Tournament Course.

SDSU, which opened the day with a nine-shot advantage over San José State and a 10-stroke margin over Nevada, shot a collective 18-over-par 306 during the final round for a 54-hole total of 40-over 904. The Spartans (+48) slipped into fourth behind UNLV (+47), but the Wolf Pack (+41) gave the Aztecs all they could handle, posting a 9-over 297 over the final 18 holes to fall one shot short.

Leading by one stroke heading into the 18th green, SDSU counted three pars and one bogey on its team score, matching that of Nevada to secure its first league crown since 2015 and second overall. With its MW title, San Diego State also clinched the conference’s automatic berth in the NCAA Regionals, scheduled for May 6-8 at four different venues.

Individually, the Aztecs were paced by Sara Kjellker (Hollviken, Sweden), who tied for second in the field with a 3-over 219 after shooting a 72. The SDSU sophomore offset two bogeys and one double bogey with four clutch birdies, including a critical make on the par-4, 370-yard No. 13, which gave the Scarlet and Black a huge boost after the Wolf Pack narrowed gap. After a bogey at the par-4 15th, she rose to the occasion once again, closing with three consecutive pars.

In addition, Fernanda Escauriza (Asunción, Paraguay) landed in the fourth spot at 5-over 221 after logging a final-round 76. The SDSU junior drained the team’s two other birdies of the day at the par-5 11th and at No. 13 to offset four bogeys and a double bogey. Despite slipping two positions from the previous round, the 2017 MW medalist helped the Aztecs down the stretch with pars on her final two holes, including the 18th, where she stuck her approach safely on the green before putting out for an even-5.

Kitty Tam (Hong Kong, China), who experienced a dearth of birdies on Wednesday, was also a model of consistency in crunch time, closing with five consecutive pars after making a double bogey and bogey on the 12th and 13th greens, respectively. Earlier, the SDSU senior weathered three additional bogeys on front nine, ultimately completing a card of 78 to finish the championship in a tie for 22nd at 19-over 235.

Elsewhere, fellow classmate Daniela Anastasi (La Jolla, Calif.) figured in the Aztecs’ winning total after logging an 80 over the final 18 holes. The La Jolla High alumna was just 2-over for the day at the turn, but stumbled on the back nine with four bogeys and a double bogey to complete the tournament in a tie for 34th at 26-over 242.

The SDSU contingent also featured Gioia Carpinelli (Boppelsen, Switzerland), who slipped nine places into a tie for 15th at 16-over 232 on the heels of an uncharacteristic 82. The Aztec sophomore was unable to regroup from a trio of bogeys before the turn, suffering six more blemishes on the back nine, including a double bogey at No. 13.