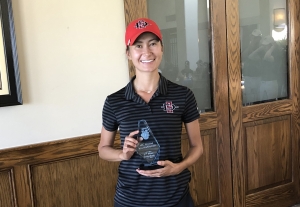 With her total, the Aztec sophomore completed the 54-hole tournament with another collegiate-best of 7-under 209, landing in the runner-up spot along with Cal Baptist’s Erica Wang, three shots behind medalist Caroline Cantlay of Cal Poly (-10).

Lee paced the SDSU delegation of seven unattached golfers in their final event of the fall, climbing three places on the leaderboard thanks to a team-high six birdies, including four on the back nine. Among her drains after the turn were back-to-back conversions on the fifth and sixth greens, with the former ranking as the third-most difficult hole of the week as a par-5, 537-yarder.

Conversely, Sara Kjellker (Hollviken, Sweden) fell out of contention, slipping three-notches into a tie for fifth at 3-under 213 following a final-round 74. Despite opening with seven straight pars, the Aztec sophomore was unable to keep pace, notching just two birdies at the par-4 No. 2 and the par-4 No. 6. However, two bogeys and a double-bogey on her finishing hole at the par-3, 170-yard No. 9 precipitated her fall.

Elsewhere, fellow classmate Gioia Carpinelli (Boppelsen, Switzerland) tied for the 14th position at 3-over 219 after matching Kjellker with a 74 on Tuesday. The Swiss native moved up one notch in the standings, offsetting two bogeys with a pair of birdies, including a successful drain on the par-3 17th, which ranked as the fourth-most difficult hole of the final round. However, a double-bogey on the par-5 No. 5 prevented a loftier perch.

Despite carding a final-round 76, senior Daniela Anastasi (La Jolla, Calif.) still managed to crack the top 25 for the first time in four outings this fall, tying for 23rd with a 5-over 221. The La Jolla High alumna sank two birdies after the turn, including an impressive conversion at the par-3 ninth, which ranked as the toughest hole of the tournament. However, four bogeys and a double on the par-4 No. 6 hastened her drop of eight places on the leaderboard.

Fernanda Escauriza (Asunción, Paraguay) finished two shots behind Anastasi in a tie for 30th at 7-over 223 after logging her second straight 73. The SDSU junior recorded five birdies on the day, including three on the back nine, to jump nine places in the standings. However, six bogeys, including three straight before the turn at No. 13-15, slowed her ascent.

Kitty Tam also gained ground on Tuesday, jumping three places into a tie for 39th at 9-over 225 after shooting a 74. The Aztec senior registered eight pars on the front nine before draining two birdies at the par-4, 400-yard No. 3 and the par-4, 369-yard No. 7, the former of which ranked as the second-most difficult hole of the tournament.

Rounding out the SDSU contingent was freshman April Ranches (San Diego, Calif.), who completed her first collegiate event in a tie for 57th at 17-over 233 after carding a 76 on Tuesday. Despite logging just one birdie on the aforementioned seventh green, the Serra High product still moved up four places thanks in part to a steady diet of 13 pars.

San Diego State will take a break from competition over the next four months before opening its spring schedule at the Bruin Wave Invitational Feb. 25-26 2019 in San Luis Obispo, Calif.