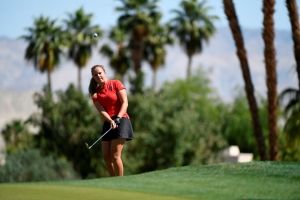 Aztecs in seventh as a team after 36 holes

UNLV (+18) and Iowa State (+18) are tied for the top spot in the tightly packed standings, while tournament host Arizona (+19) lurks closely behind in the third position, followed by Oregon (+23).

Individually, Carpinelli finds herself four shots out of the lead after carding rounds of 70-75. The SDSU sophomore offset two bogeys in the morning with four birdies, including a successful drain on her finishing hole at the par-5, 544-yard No. 8. Carpinelli added three more conversions in round two, including an impressive make on the par-4, 384-yard No. 4, which ranked as the toughest hole of the day. However, four bogeys prevented a loftier perch, along with a double bogey on the par-5 10th.

In addition, Kitty Tam (Hong Kong, China) remains three shots behind her Aztec teammate in 11th place at 4-over 148 on rounds of 75-73. The SDSU senior led the team with seven birdies on the day, including a successful conversion on her finishing green of the morning at the par-5, 550-yard No. 10, which ranks as the second-most difficult hole of the week thus far. However, Tam was plagued by a rash of 11 bogeys, which stymied her advance up the leaderboard.

Conversely, Sara Kjellker (Hollviken, Sweden) found birdies elusive, sinking just three over 36 holes to finish the day in a tie for 31st at 9-over 153. Despite two drains at the par-3 third and the par-5 fifth on her back nine of round one, the Aztec sophomore was unable to overcome the sting of seven bogeys and had to settle for a 77. Kjellker minimized the damage in the afternoon, notching 13 pars as well as a birdie on the par-4 No. 17 on her way to a 76.

Meanwhile, Fernanda Escauriza (Asunción, Paraguay) had the proverbial wheels fall off following an opening-round 74. After making four bogeys on her morning front-nine, the SDSU junior appeared to right the ship with three birdies on the back, including consecutive drains on her finishing holes at No. 8 and 9. However, Escauriza was unable to sustain that momentum, plunging into a tie for 64th at 15-over 159 after suffering an uncharacteristic 85 in round two despite 11 pars.

The Arizona Wildcat Invitational concludes on Tuesday when San Diego State tees off alongside Oregon State, Denver and Arizona State for the final round in a shotgun start at 8 a.m. MST/PDT.