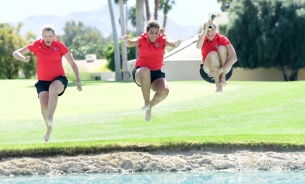 April 19, 2017 (Rancho Mirage, Calif.) - San Diego State’s Fernanda Escauriza (Asunción, Paraguay) captured the individual title at the 2017 Mountain West Championship on Wednesday after shooting a 2-under-par 70 during the final round at Mission Hills Country Club. With her total, the Aztec freshman completed the event with a 54-hole total of 6-under 210 to become the program’s first-ever medalist in a conference tournament.

“Fernanda played extremely well in all three rounds,” said SDSU head coach Leslie Spalding. “She told me this course reminded her a lot of her home track in Paraguay because of its firmness. It was certainly fun to watch her this week, and she has the ability to accomplish anything she wants in golf.”

As a team, the Aztecs landed in the runner-up spot behind UNLV for the second year in a row after logging a 5-over 293 during the final round on the par-72, 6,270-yard Dinah Shore Tournament Course. SDSU led by as many as three strokes early on the front nine Wednesday, but was unable to withstand the Rebels’ surge after the turn. With their result, the Aztecs finished three shots in back of the leader at 7-over 871 for the week, while San José State (+12) took third, followed by Fresno State (+25) and New Mexico (+31).

Escauriza, who began the day in a tie for second on the individual leaderboard, got off to a wobbly start after notching a pair of bogeys on the par-4 third and the par-3 fifth following a birdie-4 at No. 2. However, the soon-to-be champion played spot-free golf the rest of the way, notching three birdies on the back nine, including a successful drain on the par-5, 485-yard 18th to win by two shots over San José State’s My Leander, who wound up at 4-over 212.

Sirene Blair (South Jordan, Utah) also notched a top-10 placement in her final MW Championship appearance for SDSU, finishing alone in eighth at 3-over 219 on the heels of a 74. The Aztec found birdies elusive after circling her scorecard at No. 2, but a steady diet of 14 pars was not enough to ease the sting of three untimely bogeys.

Haleigh Krause (Eugene, Ore.) also matched Blair with a 74 on Wednesday, highlighted by an eagle-3 at No. 2. The SDSU junior was cruising after reeling off six consecutive pars; however, a bogey at the par-5 ninth would foreshadow trouble on the back nine. Despite carding six additional pars after the turn, Krause was undone by three straight bogeys on No. 15-17, finishing the week in 11th place with a 5-over 221.

In addition, Georgia Lacey (Del Mar, Calif.) had her final-round 75 count toward the Aztecs’ team score on Wednesday. The Aztec junior opened with nine straight pars, but quickly ran out of steam thanks to four bogeys on her first five holes after the turn. Lacey regrouped with three pars and a birdie on the par-4 No. 16, which ranked as the fourth-toughest hole of the tournament. With her spurt, the Torrey Pines High alum manage to move up one spot into 17th at 9-over 225.

Rounding out the SDSU delegation was Natalie Vivaldi (Oceanside, Calif.), who slipped three places into a tie for 13th at 7-over 223 after settling for a final-round 77. The Aztec senior sank three birdies on the day, the second-highest total on the team, but four bogeys and two doubles hastened her drop.