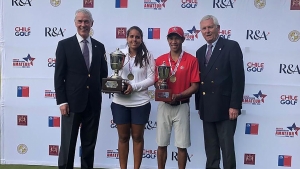 Escauriza carded a 72-hole total of 12-under-par 276 to win by eight strokes over fellow compatriot Sofia Garcia. The Aztec junior was the only golfer in the 51-player field to complete all four rounds below par (69-71-68-68).

Escauriza was 1-over at the turn on Sunday after making bogey on the par-4 No. 6, but essentially put the title out of reach with birdies on five of her first six holes on the back nine.

With her performance, Escauriza becomes the second SDSU player to win the event after Mila Chaves, another Paraguayan, accomplished the feat last year in Buenos Aires, Argentina.

Not to be outdone, Escauriza, who claimed medalist honors as a freshman at the 2017 Mountain West Championship, recently competed with Chaves as members of the triumphant Paraguayan team that captured the ladies crown at Copa Los Andes, held this past November in Montevideo, Uruguay.

Escauriza and the Aztecs open their 2019 spring schedule next month when they participate in the Bruin Wave Invitational, Feb. 25-26, at San Luis Obispo Country Club.