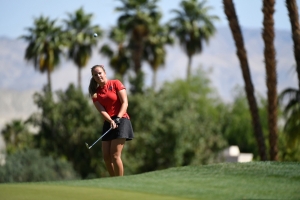 Despite shooting a 75 to tumble three spots on the individual leaderboard, Kjellker still managed her highest placement of the season and her fifth top-15 finish as a collegian, completing the tournament with a 3-over 219.

Starting on the 10th tee, Kjellker offset four bogeys with a team-high four birdies, including a successful drain on her penultimate green, the par-4, 481-yard No. 8. However, bookending the conversion was a triple bogey on the par-4 seventh and a bogey on the par-4 No. 9, which precipitated her drop.

On the flip side, Gioia Carpinelli (Bopplesen, Switzerland) was the lone Aztec to display upward mobility, firing a team-best 72 to vault 12 places into a tie for 39th at 10-over 226. The Aztec sophomore led the squad with 13 pars to go with a trio of birdies on the back nine, including an impressive make on the par-4, 350-yard No. 1. Like Kjellker, however, Carpinelli was undone by two untimely blemishes, a double bogey on the par-5 15th and a bogey after the turn at the par-3 fifth, which prevented a steeper ascent.

Elsewhere, Fernanda Escauriza (Asunción, Paraguay) was unable to gain ground on the leaders, remaining in the 39th position along with Carpinelli after posting her second straight 75 on Tuesday. After making bogey at No. 5, the SDSU junior closed with a flourish, sinking the last of her third birdies at the par-4 seventh to go with three pars.

Completing her second start of the year, senior Daniela Anastasi (La Jolla, Calif.) finished in 69th place with a combined 24-over 240 after shooting a final-round 79. After suffering a triple bogey on the par-5 No. 2, the La Jolla High product rebounded with five straight pars followed by a birdie at No. 8. However, an inopportune double bogey on the ninth green dropped her one spot in standings.

Rounding out the Aztec delegation was Cameron Lee (Tustin, Calif.), who struggled to an 82, finishing two shots behind Anastasi in a tie for 70th at 26-over 242.

USC (E) was one of just three schools with a collective card of par or better on Tuesday, recording an even 288 to capture the team title by five strokes over runner-up Arizona State (+5), while Arizona (+7) took third, followed by host Northwestern (+8) and Florida (+8), which tied for the fourth position after posting red figures of 284 and 287, respectively.

San Diego State will have over two weeks off from competition before returning to the fairways for the Stanford Intercollegiate, Oct. 19-21, in Stanford, Calif.