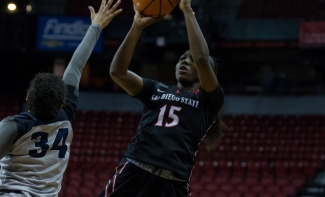 March 5, 2018 (Las Vegas) - Tenth-seeded San Diego State rallied from an 11-point first-half deficit and took the lead in the fourth quarter, but could not hold on as the Aztecs fell in overtime to seventh-seeded Nevada 95-84 in the first round of the Mountain West Championship on Monday afternoon.

The Aztecs started slow, connecting on just 43.8 percent of their attempts from the field and turning the ball over four times, which led to nine Wolf Pack points. Defensively, SDSU allowed Nevada to get a handful of uncontested looks, leading to 10 points in the paint and a 23-18 lead after one quarter.

When play resumed, the Wolf Pack stretched its lead to nine points with just under seven minutes left in the frame. The Nevada lead later swelled to 11 points on two occasions in the closing minutes of the first half, the last of which came with 1:51 remaining. San Diego State then started to have some things go its way, forcing three straight empty Nevada possessions, while scoring the final seven points of the half, which was part of a larger 9-2 second-half ending run. SDSU trailed, 43-39, at the end of 20 minutes.

Nevada came out of the intermission and promptly scored six straight points and outscored San Diego State, 8-2, to negate the Aztecs’ effort at the end of the first half. The Wolf Pack maintained a comfortable margin for a majority of the quarter until SDSU duplicated its end-of-the-first-half performance. This time, Geena Gomez got things going with a corner three, SDSU got a defensive stop which led to a fastbreak directed by McKynzie Fort and ending with a Najé Murray layup, and Fort ended the quarter with a jumper to get the Aztecs to within three at 61-58 heading into the final 10 minutes.

SDSU (11-19) kept its momentum going in the fourth, receiving a bucket from Te’a Adams and a Gomez runner in the paint, which gave the Aztecs a 62-61 lead, their first advantage since leading, 3-0. Later, Cheyenne Greenhouse supplied back-to-back baskets and Fort added an off-balance jumper, giving SDSU a 68-65 lead with 7:00 to play. Not a minute later, Greenhouse converted a three-point play to add to San Diego State’s 10-2 run and its 72-65 lead.

The circumstances got interesting shortly after the Greenhouse and-1 as Nevada’s T Moe scored five straight points to cut the Wolf Pack (15-15) deficit to two points. Fort, however, would push Nevada back as she scored on the next possession and the Aztecs got a stop on the defensive end, leading to Adams getting fouled and making both free throws. Baylee Vanderdoes then gave SDSU’s its largest lead of eight points (78-70) with a pair of free throws with 3:32 left. Moe then single handily brought Nevada back with eight points to level the score. SDSU had one final look with 2.1 seconds left, but Murray’s corner three was off the mark and the game went into overtime.

In the extra session, Nevada scored five of the first six points to take an 83-79 lead. Fort cut SDSU’s deficit in half, but the Wolf Pack made eight consecutive free throws to move out in front, 91-81, with 59.7 seconds left and never looked back. In the overtime alone, Nevada was 13-for-15 from the charity stripe.

Fort led the Aztecs with 25 points, seven assists, a game-high six assists and a career-high-tying two blocked shots. Greenhouse added a personal-best 16 points to go with seven rebounds and Murray chipped in 10 points and five assists.

San Diego State played its first overtime game at the Mountain West Championship since March 13, 2010. The Aztecs are now 1-1 in overtime game in MW tournament history.