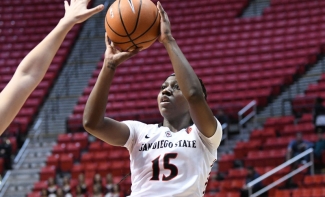 The Aztecs were led by McKynzie Fort's 17 points as she moved past Paris Johnson in to third place on the San Diego State all-time scoring list. Geena Gomez chipped in 10 points and five rebounds.

After both teams started off slow, the Aztecs went on a 7-0 run, punctuated by a McKynzie Fort three-pointer, which vaulted her past Johnson and gave SDSU a 13-5 run.

The Aztecs then went ice-cold and didn't score a bucket for the next seven minutes. This led to a 20-0 run for Wyoming after they made six of their first 10 three-point attempts, giving them a 25-13 lead early in the second quarter.

Led by Geena Gomez and Fort, the Aztecs started to cut into the deficit, making five of seven field goals to bring the score to 32-24 with two minutes left in the second quarter. However, the Cowgirls would hit back-to-back threes, including a 30-foot buzzer-beater to take a 38-26 lead in to the halftime break. In total, the Cowgirls hit nine three-pointers from five different players on 17 attempts in the first half.

The Cowgirls stayed hot from long-distance to start the second half, hitting three of their first four long-ball attempts as part of a 13-4 run to open up a 51-30 lead midway through the third quarter. Wyoming led by 20+ points for the remainder of the game.

Wyoming, who shot 48 percent from the floor, was led by Liv Roberts' 18 points. Taylor Rusk's had 17 points with 15 of them coming via the three-ball. Bailee Cotton added 11 points and 10 rebounds.

Geena Gomez has scored in double-digits in five of the past six games, averaging 12.8 points in that span.

The Cowgirls hit nine three-pointers in the first half, more than the Aztecs allowed in their past two games combined.

The Aztecs play at UNLV Saturday at 3:00 p.m. will which will be shown on the Mountain West Network. San Diego State fell to the Lady Rebels 75-64 January 27 in San Diego.