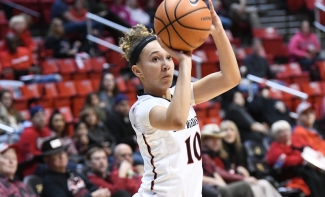 This is the fourth time Fort has earned all-Mountain West honors and is the second time she has been named to the All-Defensive team (2015-16). Murray becomes the first Aztec to make the All-Freshman team since Fort did it in after the 2014-15 season.

•  Led the team in points, rebounds, free-throws made and attempted, steals and minutes in MW games.

•  Scored in double-digits in 15 or her 18 conference games.

•  Had two double-doubles in MW games.

Fort currently boasts 1,683 career points, which ranks third on the school's all-time charts. She also ranks second in free-throws made (372) and third field goals attempted (1,424), free-throws attempted (517) and in field goals made (643). Fort ranks in the top 45 amongst all active Division-I players in the above categories, including 36th in career points.

•  Third on the team in scoring in conference play.

•  Averaging 11.4 points per game over her past five games.