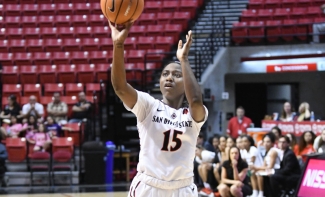 February 18, 2018 (Las Vegas) - Despite multiple comebacks, the San Diego State women’s basketball team (10-15, 4-10) fell in overtime 73-67 at first place UNLV (16-9, 11-3) Saturday afternoon. The Aztecs, who trailed by 13 points in the first half and by seven with two minutes left in regulation, rallied to force overtime, but came up just short despite 24 points from senior McKynzie Fort.

The Rebels led by seven points with just over two minutes remaining in regulation, but the Aztecs rallied to tie it up with 45 seconds remaining. After getting a stop, the Aztecs put the ball in the hands of the senior leader, McKynzie Fort, who after being blocked, hit a short jumper at the buzzer. However, after an official’s review, it was ruled late and the game went to OT.

The Rebels hit a three on their first possession of the overtime period and never relinquished their lead. The Aztecs went 1-for-5 on three-pointers in the extra period, while the Rebels suddenly found their stroke from deep and knocked down free-throws in the final minute to seal the victory.

The Aztecs started out cold from the field, but forced six turnovers in the first quarter to keep the score close. After holding a 9-7 lead, the Lady Rebels reeled off a 6-0 run to take a 13-9 lead late in the first frame. Back-to-back Aztec buckets tied the game at 13-all with 29 seconds left in the first quarter, but UNLV would hit a three, which was the beginning of a 15-2 Lady Rebel run.

During the UNLV run, the Aztecs struggled with ball control, turning the ball over seven times in the second quarter. This led to the Lady Rebels opening up a 28-15 lead with 4:13 left in the first half.

After scoring 15 points in the game’s first 16 minutes, the Aztecs would rack up 15 points in the first half’s final four minutes. SDSU made their final five field goals of the half, two of which were three-balls from Geena Gomez, including a four-point play, to help the Aztecs go on a 10-0 run and trim the deficit to 32-30 at the halftime break. Gomez and Naje Murray led the way for the Aztecs in the first half, scoring nine points apiece.

The Lady Rebels scored the first five points of the first half, taking a 37-30 lead, but then the Aztecs went on a 12-2 run, fueled but a couple fast break lay-ins to take their first lead of the game 40-39. UNLV responded with a 6-0 run to retake the lead. In total, there were 11 lead changes in the third quarter alone with the Aztecs taking a 48-47 lead in to the final quarter.

Both teams struggled offensively in the fourth quarter, but the Rebels took advantage of Aztec turnovers to build a seven point lead. The Rebel wouldn’t score for the rest of regulation as the Aztecs mounted their comeback.

After hitting just three three-pointers in regulation, the Lady Rebels knocked down two in the overtime period to build a six point lead. A Naje Murray three, cut the deficit to three with a minute left, but UNLV put the game away by going 5-of-6 from the free-throw line down the stretch.

The Lady Rebels entered the game leading the Mountain West in rebounds per game and rebound margin, but the Aztecs controlled the glass 41-37. The Aztecs also held UNLV to a 5-for-24 clip from three-point territory.

However the Aztecs, committed a season-high 25 turnovers and were outscored 32-14 in the paint.

UNLV was led by Katie Powell’s 18 points. Brooke Johnson added 17 and dished out seven assists while Nikki Wheatley chipped in 13.

Naomi Ekwedike tied a season-high with 15 minutes and grabbed a career-high seven rebounds and tied her career-high with six points.

Geena Gomez went 7-for-7 from the free-throw line, the most attempts without a miss by an Aztec this season.

The Aztecs return to San Diego for their final two home games of the season. On Wednesday, they host Air Force for a 6:30 p.m. game and then welcome San Jose State for a 1:00 p.m. on Saturday afternoon for Senior Day. Both games will be streamed on the Mountain West Network.