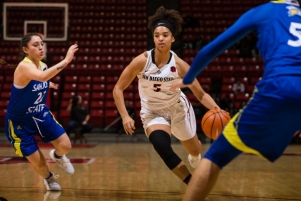 Aztecs had a season-high 29 assists

February 24, 2018 (San Diego) - Behind a season-high 34 fourth quarter points, the San Diego State women’s basketball team (11-16, 5-11 MW) knocked off San José State 85-78 Saturday afternoon. The Aztecs led for the majority of the game and then put the Spartans away by shooting 61 percent in the final quarter.

“The difference to me was our seniors,” Head Coach Stacie Terry said after the game. “We are going to live and die by our seniors. When they are down, we are down. It’s a lot of pressure to put on them but they are worthy of it and accept that responsibility and when they play like they did today, I would think we are pretty dangerous team to play in the tournament.”

The Aztecs ball movement was the key to their offensive explosion. They dished out a season-high 29 assists on 35 field goals, led by freshman Naje Murray’s career-best eight dimes.

San Diego State had nine players score and was led by Geena Gomez’s career-high 22 points; topping her previous best of 21, which was set against the Spartans earlier this season. Murray scored 15, senior McKynzie Fort had a double-double with 12 points and 16 rebounds. Cheyenne Greenhouse (10) and Arantxa Gomez Ferrer (11) also had double-digit points. Gomez Ferrer’s 11 points were a career-high and she also grabbed six rebounds.

“I’d be remised if I didn’t mention Arantxa’s performance,” Terry said after the game. “She did a great job boxing out in the post for us and that’s a piece we’ve been missing. We were able to find her and put her in positions to be successful and that was a big part of our growth and what we will need going forward. She did a good job defensively, a great job defensive rebounding and for her to score her career-high 11 points, I think it’s really huge.”

The first half was the tale of two very different quarters. The Aztecs shot 50 percent in the first quarter while the Spartans endured a stretch where they missed 14 straight shots allowing SDSU to take a 22-11 lead at the break.

The Aztecs pushed their lead to 15 (28-13) early in the second quarter and then they went cold and missed 12 consecutive buckets. This allowed the Spartans to go a 15-1 run, to pull within one point. San Diego State would make their final three shots of the first half and take a 36-33 in to the locker room. Geena Gomez led the Aztecs in scoring in the first half with 10 points.

The Aztecs pushed their lead to eight (51-43) late in the third quarter, only to see the Spartans reel off a 7-0 run to close the deficit to one in the first minute of the fourth quarter. That would be as close as SJSU would get as San Diego State responded with back-to-back threes from Khalia Lark and Murray to push the lead back to seven.

The Aztecs held the Spartans to 38 percent shooting from the field and 27 percent from three-point range. The Spartans were led by Cydni Lewis’ 22 points. Myzhanique Ladd (16), Hallie Gennett (12) and Mikaylah Wilson (10) also scored in double-digits.

San Diego State will finish the regular season with a 9-7 record at home, giving the Aztecs a winning home record in 10 of the past 11 seasons.

Three Aztecs notched career-highs Saturday. Naje Murray dished out a career best eight assists while Geena Gomez had 22 points, topping her previous high of 21, which came against the Spartan earlier this season. Arantxa Gomez Ferrer also had a career-high, scoring 11 points in 24 minutes off the bench.

The Aztecs started five seniors for their final home game, including Lexy Thorderson, who suffered a devastating knee injury last month. Thorderson, who is top five all-time in three-point makes and attempts, was immediately subbed out.

The Aztecs had a season-high in assists, totaling 28 on their 34 field goals. This comes after having a season-low four assists Wednesday against Air Force.

“Their style of play lends to our favor. We like to play fast, so when we are allowed to get up and go, I think we are at our best. What I was impressed with today was that we were able to do that against a zone. Sometimes a zone slows us down, but we were still able to play with great pace and score 85 points when they played zone the majority of the time.” – Head Coach Stacie Terry

The Aztecs wrap up their regular season with two road games next week. They will play at Boise State Tuesday evening and then head to Reno Friday evening for a clash with Nevada.