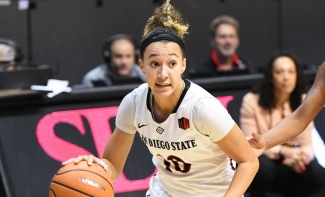 Leading 17-15 after the first period, the Aztecs (9-10, 3-5 MW) were outscored in the second and third quarters 50-21 en route to their fifth straight loss in Fort Collins.

SDSU connected on 8 of 24 three-point field goal attempts, but was just 7-for-15 inside the arc as the Rams (13-7, 5-4 MW) used a 2-3 zone throughout the night to stymie the Scarlet and Black on the interior.

CSU was led by Hannah Tvrdy, who logged her second double-double of the season with a career-best 28 points on 12-of-18 shooting to go with a game-high 10 rebounds and four steals, while teammates Veronika Mirkovic (12 pts) and Stine Austgulen (10 pts) also reached double figures.

The Aztecs built a pair of five-point leads in the opening quarter, including a 17-12 advantage after Murray nailed a jumper with 35 seconds remaining. However, Tvrdy promptly converted an and-one opportunity with four ticks on the clock to spark a 12-0 run that put the Rams in front for good.

Stung, SDSU responded with consecutive triples by Gomez to trim the deficit to 24-23 by the 4:31 mark of the second stanza, but could draw no closer. In the waning moments of the period, CSU stretched the margin to nine at 35-26 on Mirkovic’s three-pointer with 31 seconds left until Murray answered with a triple of her own just before the horn to give the contest its 35-29 score at intermission.

However, any hopes of an Aztec comeback were quickly dashed when the Rams opened with a 16-0 run over a 5:15 span to open the second half. Tvrdy scored seven points during the outburst, while Mirkovic contributed five points of her own, adding a block and a steal to help put the game effectively out of reach at 51-29.

CSU maintained a 41-31 rebounding edge for the game and owned a sizable 38-10 advantage in the paint. The Rams also scored 16 points on 13 Aztec turnovers to help fuel their win.

San Diego State will be back in action on Saturday, Jan. 27 when it plays host to UNLV at 1 p.m. PT as part its annual celebration of National Girls and Women in Sports Day.