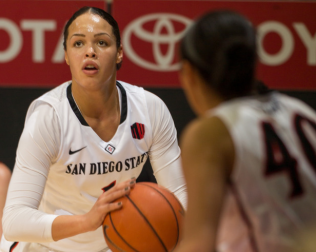 January 28, 2017 (Fort Collins, Colo.) - San Diego State women’s basketball out-rebounded one of the best defensive teams in the nation, 40-27, but was stymied by Colorado State, 60-43, at Moby Arena Saturday afternoon.

Winning its seventh-straight Mountain West game, Colorado State moved in to sole possession of first place in the league with the win and a Wyoming loss to Boise State, improving to 8-1 against conference opponents. CSU is now 16-5 overall. SDSU, meanwhile, falls to 3-5 versus MW foes and is 8-11 this season.

“Colorado State is a very good team,” head coach Stacie Terry said. “They were able to close out and contest. We got good shots but we didn’t hit them and that caused us some problems. But I thought we competed tonight and I thought we played hard. The kids tried to follow through with the game plan as best they could and I’m proud of them for that. They believed we could come in here and that they had a shot to win, so they came out and played.”

Khalia Lark matched a career high with 12 boards and recorded eight points, dishing out a pair of helpers. Kymberly Ellison posted 13 points, knocking down three of the Aztecs’ seven long balls on the night, and adding six rebounds. McKynzie Fort was held to single-digit points for just the fourth time this season with nine, but served up a trio of assists and seven boards. Ariell Bostick also had three assists.

The first quarter was a thrilling, fast-paced affair that saw San Diego State hold the league’s leader to 16 points while scoring 15 of its own.  The Aztecs were 6-of-14 from the floor, getting a pair of threes from Bostick and Ellison.

In the second quarter, SDSU tightened up its defensive play, holding the Rams to just eight field goal attempts, as compared to its own 16 shot attempts. San Diego State was out-scored in the frame, 12-8, trailing, 28-23, at the intermission.

San Diego State kept up its staunch defensive play in the third quarter. The Scarlet and Black held the Rams scoreless for four-and-a-half minutes, while Ellison single-handedly out-scored Colorado State, 7-6, in the first 7:48 of the period. The Rams capped off the quarter with four straight points for a 38-30 advantage after 30 minutes.

But the Aztecs were unable to contain Colorado State, getting out-scored in the fourth, 22-13, for the final 60-43 score.

SDSU won the battle at the glass, 40-27. But CSU held advantages in assists (16-9), blocks (3-0) and steals (8-1), turning the ball over 10 times as compared to San Diego State’s 16 turnovers. Colorado State, which ranked second in the nation with a 32.5 field goal percentage defense heading into the game, was led by reigning MW Player of the Year senior Elin Gustavsson, who scored more than half of her team’s points with a career-high 32 points.

The Scarlet and Black will stay on the road, heading to Wyoming on Wednesday, Feb. 1 for a 6:30 p.m. (MT) contest.