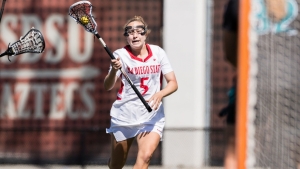 The win marks SDSU’s second victory over the Golden Bears this season and the team’s third win in 2021 (now 3-6). California falls to 2-9 with the defeat on The Mesa.

For the second straight game, sophomore Caitlin Jones was the Aztecs’ star on offense, scoring four goals on seven shots with two free-position makes, a ground ball pickup, two draw controls, and a caused turnover. Also making an impressive mark in the stat sheet was graduate student Emily Resnick, recording two goals and three assists for a total of five points, alongside a ground ball, a caused turnover, and two draw controls. Senior Bailey Brown added two scores while fellow senior Julia Sheehan, sophomore Camdyn O’Donnell, and freshman Avonna Usher each scored once in the matchup with California. The Golden Bears were led by Maya Lawliss on offense, as the California student-athlete scored four goals on six shots including a free-position make and added a ground ball pickup.

Brown’s defensive prowess was on display once again for the Aztecs, as the Katy, Texas native tallied three ground balls, three caused turnovers, and a draw control. Sophomore Makenna Nichols also snagged three ground balls while freshman Katie Wozencroft caused two turnovers and picked up a ground ball. Sharretts was dominant in the net for the Scarlet and Black, recording a .444 save percentage while grabbing two ground balls. Lily Rathbun and Riley Drullinger split time in the net for Cal, totaling four saves between the two netminders.

Jones kicked off the game's scoring with her first goal of the day just 1:27 into the matchup. The Golden Bears would answer to tie the game up at 1-1. The Scarlet and Black did not let the response keep them from finding the back of the net, scoring the next four goals to take a 5-1 lead with 15:59 left in the first half. The Aztecs would score three more times while the Golden Bears added four goals to their total before the halftime break, sending the Aztecs into the intermission with an 8-5 lead.

The second half started with a quick score from Resnick, sending the score to 9-5 in favor of the Aztecs with 27:22 left to play. The Golden Bears would not stay down long, scoring four goals over 12 minutes of play to tie up the battle at 9-9 with 13:56 left in the matchup. Usher and O’Donnell sealed the deal for the Aztecs with their scores, bringing the score to 11-9. California added a last-second goal to finish the Sunday matinee with a final score of 11-10.

“It was a great team win, as every time we play Cal, we know it is going to be a nailbiter, and today’s game did not disappoint,” noted head coach Kylee White. I am very excited about the student-athletes who stepped up today and the depth that we had—so many young Aztecs made an impact on the field and that is not only amazing for the future but also important for this team right now. I am proud of how disciplined we played and how connected we played today. These kinds of situations we faced today will prepare us for bigger things.”

The Aztecs hit the road for the final time in the regular season, driving up the coast to USC on Friday, April 9 and then continuing their California road trip with an MPSF matchup with the UC Davis Aggies on Sunday, April 11. Both games are set to start at noon.