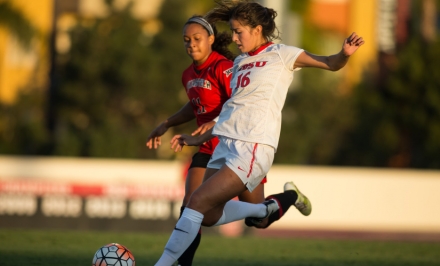 Aztecs and Cowgirls play 110 minutes with neither scoring a goal

October 23, 2016 (Laramie, Wy.) - San Diego State completed its trip to the Front Range with a double-overtime scoreless draw at Wyoming on a windy Sunday afternoon in Laramie. The Aztecs, who are unbeaten in six straight, return to America’s Finest City with an 8-6-3 record (6-1-3 Mountain West). The Cowgirls, meanwhile, watched their record move to 9-7-2 (5-4-1 MW).

SDSU had its chances in the second overtime period, but could not find the winner. On one possession early in the second OT, the Aztecs had four opportunities in front of the net, but could not put good leather on the ball. Later in the 107th minute, Dani DeRosa had only one defender between her and Wyoming goalkeeper Georgia Rowntree, but San Diego State could not put away the junior’s centering pass.

After a first half that featured the Cowgirls controlling the ball, San Diego State found its rhythm in the second half, which led to a pair of scoring chances off set pieces. One came off a Victoria Barba free kick just outside the box and another occurred off a corner kick. Each sequence, however, came up empty and the game eventually moved to overtime where the scoring drought continued until the final horn.

Wyoming outshot San Diego State in the first half, 3-2, but the tables were turned in the second as the visitors enjoyed a 6-2 advantage. Neither team was credited with a shot in 20 overtime minutes. The Cowgirls, however, had a 4-3 edge in shots on goal.

Barba and Milan Moses led all players with two shots apiece and the duo, along with Jen Rupey, each had one shot on goal. Wyoming put four on target, all of which were stopped by Gabby English, who made back-to-back big saves in the first half and recorded her sixth shutout of 2016.

The Aztecs return to action on Friday when they play host to New Mexico on Senior Night. San Diego State will recognize its seven seniors in Barba, Rupey, Gemma Craine, Meggie Gulczynski, Zsuria Phare, Hedda Regefalk and Morgan Simpson. The game is set for 7 p.m. PT atop SDSU Sports Deck and will stream live on the Mountain West Network. Admission is free.