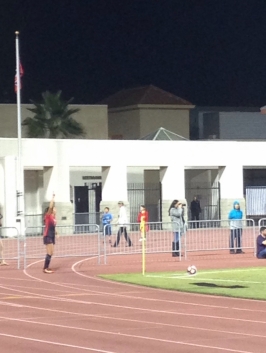 Despite a few good chances by the Aztecs, the Rebels struck first in the 24th minute with a goal by junior Sophie Cortes to give UNLV a 1-0 lead at the half.

In the second half, both teams tallied in the 47th minute, UNLV first with a breakaway goal scored by redshirt senior Susie Bernal, then the Aztecs scored on a penalty kick from senior Victoria Barba.  UNLV still led 2-1.  But in the 58th minute, Barba saved the day again with a goal on a free kick to tie the game at two.  But the effort as UNLV Jordan Magnin tallied in the 84th minute and with six minutes left, the game was as good as over until the 88th minute when SDSU got another penalty kick.  They scored.  The game headed to overtime, the game tied at three.

When that wasn't enough, it went to double overtime.

When THAT wasn't enough, it went to a shootout.  The teams traded barbs until a missed shot by the Aztecs gave UNLV the crown.  The Aztecs’ season ends in heartbreaking fashion; a 4-3 loss in a thrilling Mountain West championship game.