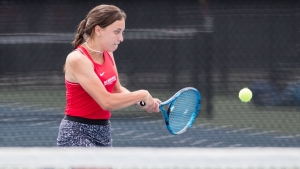 The Spartans rebounded from their first loss of the 2021 season Friday to move to 15-1 (8-1 MW) with the win over the Aztecs. The Scarlet and Black dropped to 5-8 (3-6 MW) with their stumble in Las Vegas.

San Diego State’s winning ways did not continue into singles play, however, as the Spartans brought home the dual-match victory with wins on courts one, three, five, and six. Villain Pereira topped Mulbarger 6-2, 6-1 on court five to even the score at one point each, followed by a win from SJSU’s Alba Pedrero Galindo on court one, besting senior Nnena Nadozie 6-0, 6-3. Muradyan pushed the score to a 3-1 Spartans’ lead with a 6-2, 6-3 decision over Morin on court three, and SJSU’s Jovana Babic clinched the victory with a 6-2, 6-1 win on court six over Pohrer.

San Diego State will compete in one more dual match to complete the 2021 season Sunday, taking on the UNLV Rebels on their home courts. The Aztecs’ season finale with the Rebels is set to begin at 10 a.m.