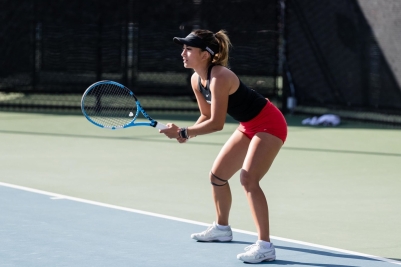 The Aztecs took the doubles point before falling in singles play.

The Aztecs (6-3) took an early lead over USD (6-3), a squad that boasts two nationally ranked singles players, by winning the doubles point. The Toreros then won five singles matches in a row, on their way to a 5-2 win.

San Diego State was tested in each doubles match. On court one, the pairing of Bunyawi Thamchaiwat and Tamara Arnold earned their seventh win of the year, 6-4 in a match that went back-and-forth throughout. The win moves the No. 1 pairing to an impressive 7-1 in doubles play this spring. SDSU then won by an identical score, 6-4 on court three, to clinch the doubles point. The duo of Alicia Melosch and Cecile Morin clinched the point for the Aztecs, it was also their first match of the spring playing as partners.

SDSU found things tougher in singles play. The Toreros won three straight singles matches to take a 3-1 lead. At the No. 5 slot, USD's Claudia De Las Heras won in straight sets over Melosch 6-1, 6-4. Morin then fell in another back-and-forth match on court six 6-3, 6-4.

USD won their third match in singles play when No. 95 ranked Abigail Desiatnikov outlasted SDSU's Nnena Nadozine 6-2, 6-2 on court two. The Toreros would clinch the match with a win on court three where Elizabeth Goldsmith beat Arnold 7-5, 6-3.

With the match already won, USD's McBride won their fifth singles match, but Regina Pitts took the match to three sets. Regina won the first set 6-2, but could not quite hold on, falling 6-1, 6-1 in sets two and three. In the final match of the afternoon, Thamchaiwat went blow for blow with Solymar Colling, the No. 59 ranked player in the country. Colling took the first set 6-2, but Thamchaiwat battled back with a 6-3 win in the second set to force a decisive third set. In that third set she earned the Aztecs second point of the day, by dispatching Colling 6-Blnk in the third set.

The Aztecs return home for the first of five straight matches at the Aztec Tennis Center when they play host to Princeton on Monday, March 7 at 2 p.m.