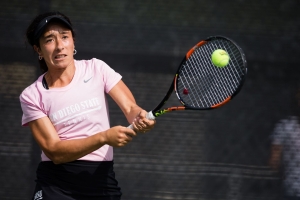 "Aztec Women's Tennis had a great first event of the fall," noted head women's tennis coach Peter Mattera. "We played very well in both singles and doubles and earned a lot of great wins against very good players. We are tremendously excited about what the rest of the year holds for us."

In singles action, Jordan kicked off Sunday’s play by collecting third place in the gold draw with a 6-0, 6-0 sweeping victory over the University of Texas at El Paso’s Thassine Abrahim.

SDSU’s luck turned around in the black draw, as Nadozie snagged her second championship victory of the day, topping CSUN’s Ekaterina Repina, 6-3, 6-0. Rimoldi Godoy followed suit with a statement win over SJSU’s Klara Milojkovic, 6-2, 6-2 to finish first in the silver draw.

The Scarlet and Black closed out the tournament with back-to-back three-set championship match victories. Arnold fought back from a second set defeat to best Utah’s Lindsay Hung, 6-1, 4-6, 6-3, earning the top finish in the red draw, while Morin collected the gold draw title with a 1-6, 7-5, 6-4 win over SJSU’s Rozalina Youseva.

San Diego State has a three week hiatus before their next taste of fall competition, participating in the ITA Southwest Regionals Oct. 17-21 at Barnes Tennis Center in San Diego, Calif.

*note: Sunday's singles matches were played to best of three sets with a 10-point tiebreak UNLESS the match acted as a championship decider. The score in parenthesis after a two-set score shows the 10-point tiebreak score.