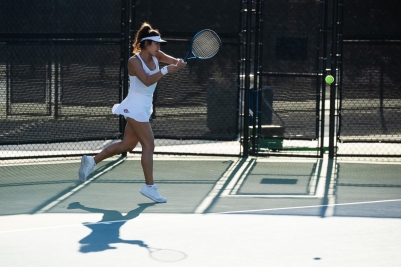 “This was truly a team effort today,” said head coach Peter Mattera. “Everyone played with good energy and confidence, especially in the big moments. The doubles point was huge in giving us not only a 1-0 lead, but the momentum to start singles play on a high note. It was also good to get Bunyawi Thamchaiwat back in the singles lineup. She was rock solid today and helped set the tone for a very positive day for the Aztecs.”

Penn earned their lone win of the day on court four. Gavriella Smith defeated Regina Pitts in a back-and-forth match 6-2, 6-3 to make it a 2-1 match in favor of the Aztecs.

Alicia Melosch earned the third point of the day for the Aztecs with another straight sets win on court five. She won the first set 6-4, before wrapping up her match with a 6-3 win in the second set, giving SDSU a 3-1 lead.

Arnold then clinched the match for the Aztecs at the No. 2 slot. She completed her perfect day with hard fought 6-4, 7-6(4) win on court two in her match and clinched the 4-1 win for San Diego State.

The Aztecs continue their homestand with a match against Dartmouth on March 23.