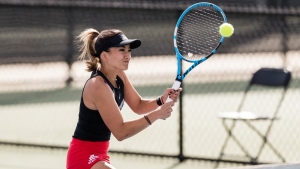 With the loss, the Aztecs move to 1-3 in conference play (3-5 overall) while the win pushes the Broncos to a 3-1 record (9-3 overall) in league action.

The Broncos used the momentum they gained from their doubles’ efforts into singles play, winning the first two completed singles matches on courts three and six. Nadozie fell to Holly Steward 6-2, 6-2 on court three while junior Agustina Rimoldi Godoy stumbled in a match with BSU’s Discenza, falling 6-2, 6-2 on court six.

The bright spot for the Aztecs came on court one, as Arnold topped Baptista in two sets by a score of 6-4, 6-2.

Boise State clinched the dual with a three-set match on court four. Morin won the first set 6-2, but could not continue her winning ways in the second and third sets, as her opponent Timm ultimately handed the sophomore a 2-6, 6-2, 6-1 loss.

“I was really proud of my team today,” head coach Peter Mattera stated. “They came out and played with really excellent energy, enthusiasm, and confidence against a tough opponent again on the road. They came up just a little bit short but they represented San Diego State at the absolute highest level. I could not be more proud and I am looking forward to coming home for two conference matches next weekend.”

The Aztecs come back to The Mesa for a weekend of conference competition, April 10-11. SDSU welcomes New Mexico and Air Force to San Diego for dual matches, playing the Lobos on Saturday, April 10 and the Falcons on Sunday, April 11. Both matches are set to begin at noon.