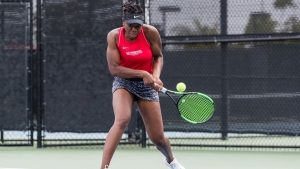 SDSU marks first loss to Colorado State, with the all-time series dating back to 1999

Palermo tied the score back up with a three-set victory on court one, topping Pitts 2-6, 6-7 (1), 6-2. Melosch put the Scarlet and Black back in the lead with a win in No. 4 singles, topping CSU’s Tracy Guo 6-2, 6-3 in two sets. Colorado State found their equalizer on court five as Grijalva topped  Alexandria Von Tersch Pohrer 6-2, 7-5. With the match on the line, sophomore Agustina Rimoldi Godoy came out strong on court six with a 6-1 victory but fell in the final two sets, 4-6, 2-6, to give the dual-match win to the Rams.

The Aztecs continue play in Fort Collins tomorrow, taking on the Wyoming Cowgirls in a neutral-site dual match. Doubles action kicks off at 1 p.m. MT/noon PT at the CSU Tennis Complex. A recap of the match will be posted after its completion on GoAztecs.com.