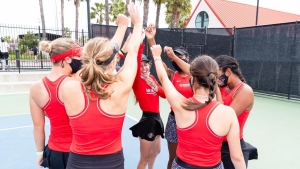 SDSU finishes the season with a 5-9 record

For the second consecutive match, the Scarlet and Black secured the doubles point. Senior Nnena Nadozie and junior Alicia Melosch topped UNLV’s Asano/Huang on court one while freshman Alexandria Von Tersch Pohrer and senior Abbie Mulbarger clinched the doubles point with a 6-3 victory over Kovacs/Fang on court three. Junior Regina Pitts and sophomore Cécile Morin struggled on court two, falling 6-1 to the senior duo of Smith/Li.

The Aztecs entered singles play with the advantage, but the Rebels fought back to quickly tie the score with a win in No. 3 singles from Huang, topping Morin 6-1, 6-2. UNLV’s Smith gave the Rebels their first lead of the day with a 6-3, 6-4 win over Mulbarger on court five, but Melosch found the equalizer with a three-set victory on court four, topping Li 6-3, 3-6, 6-2. Pitts led the Aztecs back to the top of the scoreboard with a comeback win on court two, beating Kovacs 1-6, 6-3, 7-6 (3) in tie-break fashion. Nadozie would fight off Asano after a 6-3 result in favor of the Rebel in set one, topping her opponent 6-0 in the second set, but ultimately fell in the third set 7-5 to tie the dual-match back up at three points each.

The deciding match of the day was the No. 6 singles battle, as Pohrer put up a fight in the two-set matchup, but could not secure a win over Fang and fell 6-4, 6-4.