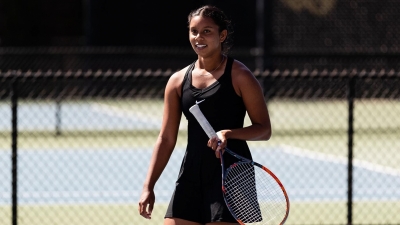 February 11, 2022 (San Diego) - The San Diego State women’s tennis team has equaled its best five-match record in the past 23 seasons, following a 4-0 victory over Long Beach State Friday afternoon at the Aztec Tennis Center. In improving to 4-1, SDSU has matched its best record to open a campaign since the 1999 squad started 5-0.

In addition, the Aztecs snapped a 14-match losing streak to the 49ers, posting he program’s first victory against Long Beach State since April 12, 2005.

The Aztecs dominated play, winning a tightly-contested doubles point and clinching the match with three straight-set victories. The Aztecs won the opening set on all six singles courts and had the lead in every match when play was stopped with the team victory was secured.

"I was really proud of the team’s effort today,” San Diego State head coach Peter Mattera said. “It was our best performance of this young season. The number two and three doubles teams gave us good boost of energy by securing the all-important doubles point and a good shot of confidence heading into singles against an always tough opponent in Long Beach State.

“All six of our singles players came out and controlled what they could control, playing excellent tennis. It was a really good team effort today by the Aztecs."

The 49ers have an elite doubles team and were victorious on court one. Sheena Masuda and Zara Lennon, ranked 48th nationally handed SDSU’s top team of Bunyawi Thamchaiwat and Tamara Arnold their first loss of the season. Long Beach State claimed a 6-1 victory handed the Aztecs their first loss at number one doubles this season. It would be the last match San Diego State would lose on this day.

The Aztecs rallied to claim the doubles point with a pair of victories at number two and number three doubles. Nnena Nadozie and Alicia Melosch evened the score with a 6-3 win on court number two. The pair improved to 4-1 this season.

That meant the double point would be decided on court three, where SDSU’s Regina Pitts and Cécile Morin faced Arina Babkova and Peppi Ramstedt. The Aztecs entered the day 0-3 at that position, the only spot in the lineup in singles or doubles without a winning record. But Pitts and Morin were up for the challenge recording a 6-4 victory and giving he Aztecs a 1-0 lead in the match.

After that, things got considerably easier for the Aztecs.

San Diego State quickly took control on all six singles courts. The Aztecs extended the lead to 2-0 on court two. There, Arnold improved to 3-1 on the season with a 6-3, 6-4 win over Masuda.

At the top of the lineup, Thamchaiwat, ranked 80th nationally, surrendered only three games in a 6-2, 6-1 victory over Nikola Homolkova. The senior improves to 4-0 on the season and her victory gave SDSU a 3-0 advantage.

San Diego State clinched the team victory when Pitts disposed of Le du 6-0, 6-1 at No. 4 singles.

San Diego State is back in action tomorrow when the Aztecs play host to Cal Poly (3-2). The Mustangs were a 7-0 winner at UC San Diego on Friday. Match time is scheduled for noon at the Aztecs Tennis Center and admission is free.