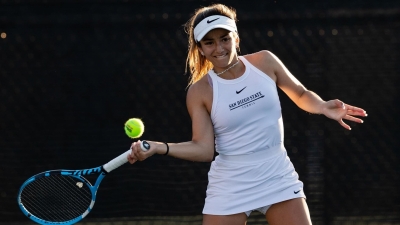 The Aztecs improved to 9-4 overall and 1-0 in Mountain West play and snapped the Broncos four-match winning streak. The victory gave San Diego State a win in its Mountain West Conference opener for just the second time since 2014 and provided the Aztecs with their fourth conference shutout since 2015.

“I was really proud of our effort today,” San Diego State head coach Peter Mattera said. “We played with terrific energy and confidence. There were a lot of big moments and the team was outstanding in those moments. This was a great start to the conference season and we are looking forward to another good test on senior day tomorrow against Utah State.”

SDSU claimed the doubles point by winning on courts one and three. At number one doubles, seniors Bunyawi Thamchaiwat and Arnold, ranked 51st nationally, cruised to a 6-2 win over Nicole Discenza and Joana Baptista. The Aztec duo, first off the court Saturday, improved to 10-2 in the calendar year.

After dropping the match at number, SDSU clinched the doubles point when Melosch and Julia Jordan defeated Pauline Ernstberger and Ana Conde Vendrell, 6-2. Jordan was in the doubles lineup for the fourth time this season, but the first time since Jan. 29, teamed up with Melosch for the first time in 2022.

San Diego State was nothing short of dominating in singles play, recording the three singles victories in straight sets and dropping a mere 14 games in the process.

First off in singles action was Arnold on court two. The senior posted her fourth consecutive victory and improved to 9-3 on the season with a 6-2, 6-2 victory over Baptista to give the Aztecs a 2-0 lead.

San Diego State stretched the advantage to three points with a victory on court five. Melosch disposed of Discenza, 6-1, 6-3, to run her win streak to four matches and post her ninth victory of the season and tie Arnold for team-high honors.

The Aztecs clinched the win with a 6-4, 6-3 victory by Nnena Nadozie over Holly Stewart on court three. Nadozie, one of three Aztec players to appear in the singles lineup every match this season, posted her sixth victory of the campaign.

For the second consecutive match, Thamchaiwat, who has climbed to a No. 83 national ranking in singles play, received a no decision after owning a 7-5, 2-1 lead when the match was stopped after the Aztecs clinched the team victory.

The Aztecs end their regular season with their final eight regular-season matches away from home (either road or neutral matches). That means that San Diego State will celebrate Senior Day prior to the match against the Aggies. Scheduled to make their final appearance are three SDSU seniors –Nadozie, Regina Pitts and Agustina Rimoldi Godoy.

Three other student-athletes listed as seniors on San Diego State’s roster have eligibility remaining and intend to return next season.