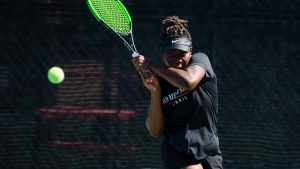 September 27, 2019 (San Diego) - San Diego State women's tennis hosted the first round of the SDSU Fall Classic I on Friday, recording a sweep in singles play while capturing three doubles victories throughout the tournament’s first day of competition.

In the red doubles bracket, the 2019 all-Mountain West doubles duo of junior Nnena Nadozie and sophomore Alicia Melosch started their 2019-20 campaign with a decisive 6-0 win over University of Texas at El Paso’s (UTEP) Maria Aveiga and Kathleen Percegona.

In singles action, the Aztecs continued their success from doubles play, as Arnold recorded a 6-3, 7-5 win over UTEP’s Vanessa Valdez in the red draw while Nadozie notched a 6-1, 7-5 victory over MSU’s Dalia Ahmed in the black draw.

In the white bracket, both athletes donning the Scarlet and Black needed three sets to bring home wins on The Mesa. Mulbarger rallied for a three-set victory over GCU’s Jana Weiss, winning 7-5, 3-6, 6-2, while Melosch logged a 6-2, 2-6, 6-1 win over MSU’s Carlotta Romito.

The final Aztec victory of the day came from Rimoldi Godoy, rallying back from defeat in doubles play with a 6-2, 6-2 defeat of MSU’s Stella Cara.

Competition continues with day two on Saturday, Sept. 28. Doubles action is set to begin once again at 9 a.m. with singles play immediately following.

Admission to Fall Classic I is free and fans are encouraged to park in P7 on the corner of 55th Street and Montezuma Road. The Aztec Tennis Center is located just beyond Tony Gwynn Stadium, SDSU Softball Stadium and the Aztec Aquaplex on the northwest edge of campus.

SDSU Fall Classic I – Day One