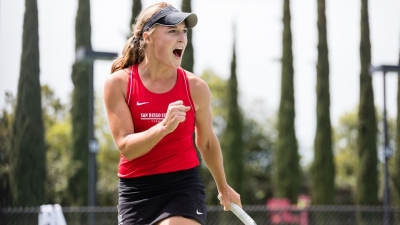 The Aztecs open their Fall 2021 season Sept. 24-26, as select members of the team head to Berkeley, Calif., to compete at California’s Fall Invitational.

The Scarlet and Black then host the San Diego State Fall Classic I Oct. 1-3 at Aztec Tennis Center.

SDSU next competes in the ITA Southwest Regional Championshipsat the Barnes Tennis Center in San Diego, Calif. Oct. 21-25. The Scarlet and Black will co host the annual event with the University of San Diego Toreros.

After the regional event, four members of the Aztecs will participate in the University of San Diego’s San Diego Veterans Tennis Classic, scheduled for Nov. 5-7.