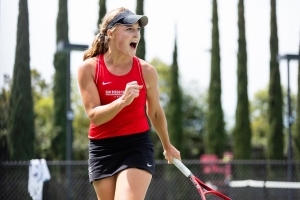 January 29, 2022 (San Diego) - The San Diego State women’s tennis team early season dominance continued Saturday, as the Aztecs defeated UC San Diego, 4-0, at the Aztec Tennis Center. At 3-0 this season, the Aztecs have matched their best start to a season since 2019, and has outscored the opposition 14-1 this season.

San Diego State dominated the match against their Big West foe, clinching the victory by sweeping the first four points of the match. In addition, the Aztecs won the opening set on all six singles courts before the match was halted after securing the win with three straight-set singles victories.

"This was a really good team effort today,” San Diego State head coach Peter Mattera said. “We came out with really good energy from first ball and maintained a very high level until we secured the fourth point. Both the number one and number two doubles teams continue to be exceptional. I was proud of our effort in both singles and doubles today. We are going to try to keep getting better every match."

San Diego State’s potent doubles team of Bunyawi Thamchaiwat and Tamara Arnold were first off the court. The Aztec seniors posted a 6-1 victory on court one, disposing of Ella Pachl and Sophie Pearson. The Tritons struck back, with Rachel Wagner and Anu Bhadada posting a 6-3 victory at No. 3 over the Aztec team of Regina Pitts and Julia Jordan. SDSU earned the doubles point, with Nnena Nadozie and Alicia Melosch recording a 6-3 victory over Katelyn Vu and Adriana Tabares.

Returning to the top of the Aztec lineup was Thamchaiwa. The 82nd-ranked singles player nationally wasted little time with a 6-2, 6-0 win on court one to put San Diego State up 2-0. Thamchaiwa remains undefeated in 2022, with a combined singles and doubles record of 4-0.

SDSU clinched the match on court five. Melosch dropped just four games over two sets, winning 6-0, 6-4 to give the Aztecs their fourth team point and the match win. Melosch, a double winner on Saturday, improved to 2-0 in doubles this season to go along with a 3-0 mark in singles.

On the season, San Diego State has won 11 of the 12 singles matches that have been played to conclusion. In addition, the Aztecs have claimed the doubles point in all three matches.

San Diego State hits the road for the first time this season when the Aztecs travel to Tucson, Ariz. to face Arizona on Saturday. The Wildcats have yet to play this season, but have a busy week ahead. Arizona, which finished 13-12 a year ago, will play at both UTEP and at New Mexico State on Monday.