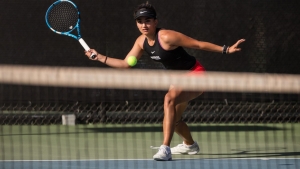 SDSU earns its second conference victory of the 2021 season

The win marked the second conference victory for the Aztecs and moved the Scarlet and Black to 4-5 (2-3 MW) overall. The loss sent the Lobos’ record to 7-5 (1-3 MW).

The Aztecs started the day with a successful doubles point sweep, earning wins on courts 1 and 2. The duo of senior Tamara Arnold and junior Alicia Melosch took the No.1 doubles win with a 6-1 topping of Natasha Munday and Hsuan Huang while junior Regina Pitts and sophomore Cécile Morin saw success on court two, securing a 6-3 victory over Yue Lin Chen and Myu Kagayama.

Arnold continued her recent success in singles play, earning her third consecutive victory in the No.1 singles spot with a 6-2, 6-1 win over Chen. Pitts followed with a 6-3, 6-1 triumph on court two, beating Munday to move the Aztecs to 3-0. Senior Abbie Mulbarger clinched the dual-match victory on court six, surpassing Satoho Toriumi 6-1, 6-2.

Three of the Aztecs’ four victories this season came with a win in doubles action (continued in today’s play). The lone exception was the Scarlet and Black’s 4-2 win over the Nevada Wolf Park on Sunday, March 28.

“It was really nice to be back at home today,” noted head coach Peter Mattera. “The team played very solidly both in doubles and singles play. They deserve a nice little boost of energy with a good win today over a solid New Mexico team. We are hoping to come out and duplicate that effort and energy tomorrow against the Air Force Academy on senior day.”

The Aztecs compete in their final home match of the 2021 season, hosting the Air Force Falcons Sunday for a senior-day matchup. Doubles action is set to begin at noon. A live stream of the No. 1 and No. 2 singles and doubles matches will be available here.