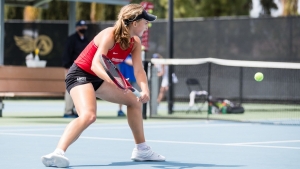 The lone Aztec duo to record a win Sunday was junior Alicia Melosch and senior Nnena Nadozie, who brought home a No. 1 doubles match win with a 6-1 defeat of Wyoming’s Brink/Oreshkina. Unfortunately, the Scarlet and Black were unable to find a rhythm in doubles play and fell on courts two and three. Regina Pitts and sophomore Cécile Morin fell 6-2 to the Cowgirls’ Fernandez/Zehender in No. 2 doubles action and senior Abbie Mulbarger and freshman Alexandria Von Tersch Pohrer fell by the same score on court three to UW’s Krause/Kaftanova.

San Diego State competes in one more weekend of Mountain West conference dual-match play, traveling to Las Vegas, Nev. to take on UNLV and San José State. The match with the Spartans is scheduled for a 12 p.m. start on April 24, while the Aztecs’ season finale with the Rebels is set for 10 a.m. on April 25.