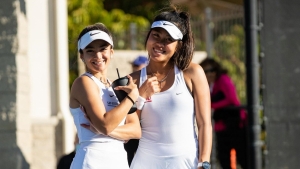 February 18, 2022 (San Diego) - The San Diego State women’s tennis team improved to 6-1 on the season and ran its home match win streak to nine with a 5-2 victory over Hawai’i on Friday afternoon at the Aztec Tennis Center.

The Aztecs received singes and doubles wins from Bunyawi Thamchaiwa and Tamara Arnold in winning its third consecutive match. San Diego State had a 4-1 advantage when it secured the victory.

“I was really proud of the team today,” San Diego State head coach Peter Mattera said. “It was a team victory in every respect. We had to fight for every point against an always tough Hawai’i team.”

The win over the Rainbow Wahine marked the third victory for the Aztecs in the last four series meetings.

“It was both a really good test for the Aztecs, as well as a match that will make us better as we get ready for a good stretch of home contests against some quality opponents,” Mattera said. “We received very strong leadership from both our number one doubles team (Thamchaiwa and Arnold) and from our number one singles player, Bunyawi (Thamchaiwat), in getting us leads in the doubles and as the first point off in singles. We are looking forward to our match on Sunday against No. 7 California.”

San Diego State got off to a strong start with Thamchaiwat and Arnold at the top of the doubles lineup. The pair, who improved to 5-1 this year, did not drop a game, recording a 6-0 victory over Gitte Heynemans and Léa Romain. Hawai’i drew even with a win at number two doubles. Ana Vilcek and Tal Talya Zandberg were 6-2 winners over the Aztec team of Nnena Nadozie and Alicia Melosch.

For the third consecutive match, Regina Pitts, the reigning Mountain West Conference Player of the Week, and Cécile Morin clinched the doubles point for the Aztecs. The clutch duo posted a 6-3 decision over Satuski Takamura and Nidhi Surapaneni, giving SDSU the doubles point and a 1-0 lead.

San Diego State stretched the team lead to 2-0, when Thachaiwat, currently ranked 80th nationally in singles, defeated Takamura 6-2, 6-1. The senior improved to 6-0 this year and won the only singles match decided in straight sets.

Nadozie rallied from one-set down to post a 3-6, 6-2, 6-3 victory over Vilcek on court number three. The victory stretched the Aztec advantage to 3-0. Hawai’i responded with a three-set win of its own. At number five singles, Heynemans defeated Jordan 2-6, 6-3, 6-3 to cut the Aztecs' advantage to 3-1.

Fittingly, San Diego State clinched the team victory on court number two, where Arnold, one half of the Aztec pair that posted a 6-0 doubles victory on court one earlier in the day, won 6-3, 4-6, 6-4 versus Romain. Arnold improved to 5-1 in singles action this year.

San Diego State is back in action on Sunday when the Aztecs play host to No. 7 California. Match time at the Aztec Tennis Center is set for 2 p.m. and admission is free. The Golden Bears are 5-3 on the season and will represent the first nationally-ranked opponent San Diego State has played this season.