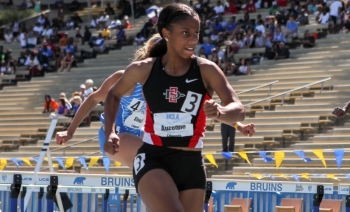 Auzenne broke her own San Diego State record in the 60-meter hurdles and tied her mark in the 60-meter dash on the final day of the Cherry & Silver Invitational Saturday. She first broke her record in the 60 hurdles, taking second in the finals with a time of 8.11 seconds. The time eclipsed her previous best of 8.18, set last year at the MW Championships and earlier in the day in the semifinals. Later in the open 60, Auzenne tied her school record with a clocking of 7.32 in the finals to win the event. Her previous 7.32 also came at the MW Championships last year. Auzenne also won the semifinals of the 60 in 7.38.

Auzenne and San Diego State travel to Seattle, Washington for the second time this season to compete at the UW Invitational on Friday, Jan. 27 and Saturday, Jan. 28.