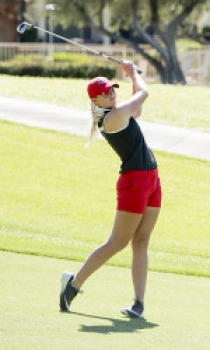 
Lacey was SDSU’s top golfer in two tournaments last month, recording a team-best 70.00 scoring average in four rounds to go with a pair of top-15 placements.

Lacey made a huge splash at the highly competitive Stanford Invitational hosted by Condoleezza Rice, Oct. 14-15, posting her highest finish in an Aztec uniform with a tie for second place against a field that featured eight top-25 squads. The Torrey Pines High alumna shot a 36-hole total of 2-under-par 140, topping 29 individuals ranked in the Golfstat top 100, including four players in the top 10.  Lacey, who led the prestigious event in par-4 scoring (3.83), shot a career-low 4-under 67 in round one, highlighted by a team-best six birdies to go with an eagle-3 on the par-5, 495-yard No. 1 hole.

Later at the Las Vegas Collegiate Showdown, Lacey helped San Diego State tie for fourth place in the team standings after completing her seventh career top 20 with a 15th-place showing at 4-under 140 on back-to-back rounds of 70. She sank eight birdies for the week, including an impressive drain on the par-4, 398-yard No. 9 in the final round, which ranked as the toughest hole of the tournament.

For the season, Lacey owns a 71.71 scoring average and finds herself at No. 53 in the latest Golfweek/Sagarin individual rankings. She also occupies the 59th position in the most recent Golfstat Cup standings.

Lacey and the 30th-ranked Aztecs will have the next three months off from competition before opening their 2017 spring schedule at the Northrup Grumman Regional Challenge, Feb. 12-14, in Palos Verdes Estates, Calif.