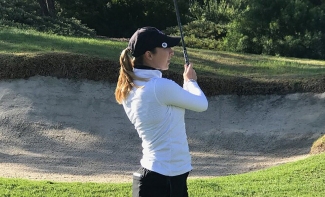 Carpinelli posted SDSU’s highest individual finish of the season after tying for second with a collegiate-best even-par 216 on the par-72, 6,085-yard course layout. The Swiss native got off to a sizzling start at the two-day event, opening with consecutive rounds of 69 and 70, which marked her two lowest scores of the year thus far.

In addition, Carpinelli led the field of 78 golfers with a 3.88 scoring average on par-4 holes (-3) and finished fourth with a 4.80 stroke average (-3) on par-5s. For the tournament, she bested five players ranked in the Golfstat top 100, including three from Washington, helping the Aztecs top the No. 14 Huskies in the standings.

Carpinelli also drained 10 birdies overall, including five in the second round, as one individual competitor carded a red figure for the event. For the season, she ranks second on the team with a 75.14 scoring average.

Carpinelli and the Aztecs return to the course next week when they play host to their lone tournament of the season, the sixth annual SDSU March Mayhem, scheduled for March 26-28 at The Farms Golf Club in Rancho Santa Fe, Calif.